Uefa reveal Euro 2016 team and player of the tournament

Wales duo of Aaron Ramsey and Joe Allen in the XI, with Cristiano Ronaldo also included 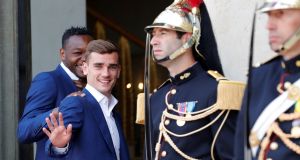 Euro 2016 came to an end on Sunday night with Portugal springing a surprise with victory over hosts France in Sunday’s final.

On Monday Uefa’s 13-strong panel of technical observers, led by chief technical officer Ioan Lupescu and including Alex Ferguson, David Moyes and Packie Bonner picked their team of the tournament.

While with six goals and two assists France attacker Antoine Griezmann was named as their Player of the Tournament - as well as picking up the Golden Boot award as top goalscorer.

The Atletico Madrid player had been at his influential best for much of the knockout stages, despite a quiet showing in the final. He scored both goals in France’s 2-0 semi-final win against Germany, having also struck twice to spark Les Bleus’ 2-1 comeback victory against the Republic of Ireland in the round of 16.

Renato Sanches was chosen ahead of French winger Kingsley Coman and his Portugal team-mate Raphael Guerreiro as the Young Player of the Tournament.

RUI PATRICIO (PORTUGAL): Played well in the final and as part of the victorious team edges ahead of Hugo Lloris, Manuel Neuer, Michael McGovern and Lukasz Fabianski to secure the spot in goal.

JOSHUA KIMMICH (GERMANY): Chosen ahead of Chris Gunter, and Kyle Walker. The Bayern Munich youngster impressed with his composure in possession, filling a real problem position for the World Champions. Picked despite his mistake for the second goal in the semi-final defeat to France.

JEROME BOATENG (GERMANY): The Azzurri back line was thoroughly impressive at Euro 2016, but the former Manchester City defender gets the nod. Germany conceded only once from open play in the competition - and that was after Boateng had limped off injured against France.

PEPE (PORTUGAL): The Real Madrid centre back was the best defender in the tournament. And he even managed to avoid getting booked in the final.

RAPHAEL GUERREIRO (PORTUGAL): A consistent performer for the winners at left-back and was almost the hero with a free-kick that struck the crossbar in extra-time minutes before Eder sealed it. Pips Germany’s Jonas Hector to the left-back position.

AARON RAMSEY (WALES): You only needed to see the semi-final display against Portugal to see how important the absent Arsenal midfielder has been to Wales. Ramsey impressed along with Joe Allen and his passing range — and know-how on when to keep possession — was crucial in the historic run to the last four, so too his defensive contribution.

TONI KROOS (GERMANY): The 26-year-old is one of the best midfielders in Europe, with his mixture of incredible passing range and equally-impressive vision. Dictated proceedings for Germany but was unable to prevent his country bowing out to hosts France in the semi-finals.

JOE ALLEN (WALES): The Liverpool midfielder is perhaps a surprise inclusion, especially with his team’s talisman Gareth Bale not making the cut. Allen though played with a bite that has so often been missing in his time at Anfield. Full of running, tackling, and not afraid to put his foot on the ball - Joe Allen’s performances summed up Wales’ tournament.

DIMITRI PAYET (FRANCE): Initially dismissed by Didier Deschamps, the West Ham man’s form led to a recall and what an inspired decision it has proven. Outstanding for the hosts with two man-of-the-match displays and as many goals in the group stage, Payet continued to impress in the knock-out stages, scoring a sublime effort against Iceland.

CRISTIANO RONALDO (PORTUGAL): The 31-year-old started slowly and was mocked by some as the Portuguese stumbled through the group behind Hungary and Iceland. But Ronaldo shone against the former and was the catalyst as Fernando Santos’ men overcame Wales, deservedly winning the man-of-the-match award as he took his tournament tally to three goals and three assists. Injury severely limited his impact on the final but over the piece he earned his place in this XI.

ANTOINE GRIEZMANN (FRANCE): Following a fine season with Atletico Madrid, it should perhaps come as little surprise to see Griezmann shining so brightly for the home nation. A fine finisher and intelligent in possession, the 25-year-old’s brace against world champions Germany saw the home nation into the final, taking his tally to six for the tournament, but he had a disappointing final and should have scored a seventh but headed over the top from close range in the second half.