Thomas Hitzlsperger announces he is gay 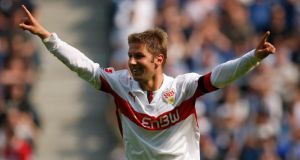 Thomas Hitzlsperger has become one of the few high profile sportsmen, and the first well-known German footballer, to publicly reveal that he is gay. Photograph: Ina Fassbender/Reuters.

Der Hammer, has earned widespread praise after becoming Germany’s first professional footballer to come out as homosexual. Four months after ending his career at Everton, the 31-year- old former international told Die Zeit weekly that accepting he was gay had been a “long and difficult process”.

“It is only in recent years I have come to realise I preferred living with a man,” Hitzlsperger told the paper.

Often seen in public during his career with a long- term girlfriend, the couple broke up shortly before they were due to get married in 2007.

Hitzlsperger played for the youth team of Bayern Munich before transferring to the Aston Villa in 2000. He went on to serve as captain of Bundesliga team VfB Stuttgart, play in Italy’s Serie A for Lazio as well as VfL Wolfsburg, before ending his career last year with Everton.

Hitzlsperger insisted he had never been ashamed of his sexual identity.

Though homosexuality was mostly ignored in professional football, he said it annoyed him when he heard cliched assumptions that “gays are weaklings”.

“Think about it – 20 young guys sitting at a table drinking,” he said. “You go along with the group, as long as the jokes are at least half-way funny and the talk about homosexuality doesn’t get massively insulting.”

End taboo
He said he hoped speaking openly about his sexuality would help end the sexuality taboo in professional football. “I’m talking about my homosexuality because I want to advance the discussion about pro athletes being gay,” he told Die Zeit.

Via Twitter the former midfielder said he was overwhelmed by messages of support and said he hoped it would encourage other players to break their silence.

His announcement earned praise from all corners of German public life. Chancellor Angela Merkel’s spokesman said: “We live in a country where no one should be afraid to state their sexuality for fear of intolerance.”

From Britain, deputy leader Nick Clegg tweeted his support, as did former England player Gary Lineker. Hitzlsperger responded to Clegg, saying: “I hope this shows that other people can come out without any regrets. Sport will be a better place.”

DFB president Wolfgang Niesbach said respect he had always had for Hitzlsperger “had grown even further”.