Sturridge to start as Wayne Rooney returns to face Scotland 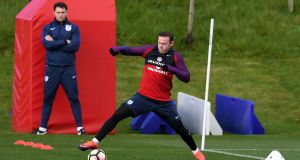 Daniel Sturridge is set to start England’s World Cup qualifier against Scotland on Friday night, with Wayne Rooney recalled in a No 10 role for a game Gareth Southgate believes will provide his captain with the perfect stage on which to reassert his influence at this level.

Southgate is inclined to opt for Sturridge, who is without a Premier League goal this season, ahead of Harry Kane, with the Tottenham Hotspur striker having played 73 minutes of Sunday’s north London derby on his comeback after seven weeks out with ankle ligament damage.

Although he is fully recovered from that injury, the lay-off has rendered him rusty and the interim manager would prefer to use him, if required, from the bench.

Sturridge has also endured life on the sidelines at club level of late and has not started a top-flight game since Liverpool’s goalless draw with Manchester United in mid-October but he did score twice against Spurs in an EFL Cup tie.

He also struck the woodwork twice during a 19-minute cameo against Watford on Saturday and, having started the qualifiers against Malta and Slovenia last month, retains the faith of the national management.

Southgate hopes Raheem Sterling and Adam Lallana will provide service from wide, with Rooney operating as the central pivot of the three.

In Slovenia, England’s record outfield cap holder and record goalscorer had been dropped for the first time since breaking into the national set-up in 2003 after a period on the fringes at United that reflected sluggish early-season form and apparent confusion over his best position within the side.

Southgate, however, has spied a player revived in training up at St George’s Park this week, with Rooney having impressed as a starter in his club’s past two games, and is convinced the captain’s experience will be vital against Scotland.

He suggested Rooney was “better placed” than last month. Asked what had changed to revive the 31-year-old, Southgate said: “Game time, as much as anything. He wasn’t in a flow of playing but he has had more matches since. He had two 90 minutes last week, scored and had two assists. To my mind, even in his training, he looks freer in his mind. That is an important place to be in order to perform.

“I think he will play well. He doesn’t have anything to prove to me. The whole basis of our conversation [before the Slovenia game] wasn’t about my belief in him as a player. I made a decision that I thought was right for that game. He is a big-game player with big-match experience. I think a game like this will be perfect for him.”

In England’s first competitive game against Scotland since the 1999 two-leg play-off to reach Euro 2000, Jordan Henderson and Eric Dier are expected to anchor the hosts’ midfield, with the Tottenham full backs Danny Rose and Kyle Walker having apparently overcome minor fitness problems to feature.

Southgate put his entire 25-man squad through their paces at St George’s Park on Thursday before they travelled to their hotel in Hertfordshire, with the manager hoping to achieve the favourable result that should ensure he is confirmed in the role on a permanent basis this month.

The League Managers Association chairman, Howard Wilkinson, will be called upon to advise the Football Association on the permanent replacement for Sam Allardyce, it has emerged.

It is understood that the FA plans to rely on a wider body of opinion than when Allardyce was appointed by the trio of chief executive Martin Glenn, the then acting chairman, David Gill, and FA technical director Dan Ashworth.

As such, the former Leeds United manager and one-time FA technical director will be among those consulted. However, it also understood that Gill will not have a say this time around, following criticism from Sunderland over his role when Allardyce was appointed.

1 Philip Browne admits funding model for Irish rugby is not sustainable
2 Dr Bob Rotella: ‘If you focus only on the target you’ll play darn good golf’
3 Zoom calls with Rory and the GUI bake-off: Neil Manchip keeping the flag flying
4 Dave Hannigan: Trump gets the clubs back out as death toll keeps rising
5 Munster braced for worst of financial crisis due to Thomond Park debt
Real news has value SUBSCRIBE
Crossword Get access to over 6,000 interactive crosswords