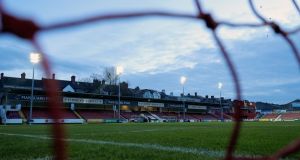 St Patrick’s Athletic chairman and owner Garrett Kelleher has accused the FAI’s chief executive Gary Owens and his deputy Niall Quinn of “misleading” clubs with regard to the prospects of securing the funds required to get the Airtricity League up and running again.

With talks on a resumption of the season set to resume on Wednesday, Kelleher brands the pair’s efforts to date as “a failure” saying that they have “failed badly” in a letter to three FAI board members with a background in the league – Martin Heraghty, Dick Shakespeare and Paul Cooke.

The property developer and club owner says that “the domestic game is at a critical juncture where any more wrong or naive moves made by the executives could do even longer lasting damage. They (Owens and Quinn) have lost the confidence of St Patrick’s Athletic, I can’t speak for anyone else.”

He goes on to call on the three board members to step into the process in an attempt to salvage a campaign he clearly does not believe is going to be saved as things stand.

Kelleher is severely critical of the proposals put to clubs at the end of last week and says that when pressed to do so, Owens was unable to provide satisfactory guarantees to clubs that the association had the €3.4 million that it was committed to providing under the terms of the plan. He contends that while the two interim officials had claimed a “high probability of delivering UEFA, FIFA, Streaming, Government and or other third party funding…zero has been delivered.”

The letter is the latest sign of frustration among the league clubs at the association’s apparent inability to provide the sort of financial support that they believe is required to make playing out the season viable.

A significant portion of the package put to the clubs on Thursday and Friday was to be funded by the pooling and, in phases, redistribution of existing monies but on Sunday evening the four clubs that are scheduled to play in European competition this summer made it clear that they would not be contributing a share of their prize money to the intended kitty.

Other clubs that spoke to The Irish Times on Monday were more positive about the efforts being made by Owens and Quinn to achieve an agreement that would allow a return to competitive action in August, but none expressed the belief that the package of supports presented last week would be enough to conclude a deal.

Late on Monday night the FAI responded to Kelleher’s letter with a short statement to say they are “fully supportive” of Quinn and Owens’ efforts to resume the league.

The statement read: “The Board of the Football Association of Ireland notes the correspondence received from Garrett Kelleher this evening.

“The FAI has engaged in intensive and ongoing consultations with relevant stakeholders, including all SSE Airtricity League clubs, with regard to the resumption of the League.

“The Board is fully supportive of the efforts being made by the Executive team in this regard and we will continue to support these endeavours.”