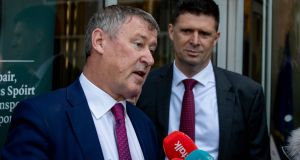 Gary Owens and Niall Quinn will continue efforts over the weekend to get clubs to buy into their proposals to have the Airtricity League restarted but what had been expected to be a ‘make or break’ day for their campaign appears to have fallen very flat after Owens failed in an 11th hour attempt to persuade the FAI’s board to provide €2.5 million in backing for the plan.

The pair seem to have been unable to secure any significant additional funding from Government, Uefa or Fifa since the meeting on May 14th when they proposed a range of actions to get clubs back playing which came with a price tag then estimated to have been €2.6 million.

The proposal to split €1.1 million between the clubs to compensate for loss of gate receipts and other match day revenues was not, however, enough to win over clubs that have sought guarantees that a return to action would not require them to run very substantial deficits for the season.

It had been widely hoped that the pair would manage to secure the funding required from third parties to significantly improve the package and Minister for Sport Shane Ross said on Thursday evening that he would be “amazed” if the league was not catered for in a wider Government recovery plan for sport.

With nothing concrete on the horizon at this stage, however, Owens instead sought the €2.5 million at a board meeting late on Wednesday evening.

The request is understood to have been rejected on the basis that the plan presented to its members was not sufficiently robust to justify the risk involved.

Owens acknowledged in the meeting with clubs on Thursday afternoon that the required funds had not been found. He said, however, that he would be outlining a proposal to different groups of clubs – those preparing to play in Europe, members of the First Division and then Premier Division clubs as a whole – in the hope of securing an agreement that would then help him and Quinn to drum up the required support.

The first of those meetings took place on Thursday evening with the other two scheduled for Friday. It is believed that a possibility being explored is to pool various existing funds, like the Uefa solidarity money, in an attempt to put an alternative package together.

The solidarity payments are intended to fund the clubs’ underage League of Ireland sides and though Uefa has told national associations in recent weeks that they will be allowed more flexibility with regard to how this money is used, it is not clear what would happen with regard to the elite youth teams and competitions if the money is used for other purposes.

In a three-line statement, the FAI described the meeting between the association’s representatives as “productive”.

It certainly does not seem to have advanced the cause of a resumption much, though, and it seems hard, at this stage, to imagine that the association will be in a position to provide much by way of positive news to Uefa ahead of its executive committee meetings and briefings next week when outstanding issues in relation to both club and international competitions are to be addressed..

It has also emerged, meanwhile, that two prominent club officials who were appointed to the association’s finance committee last October have written a 19 -page letter to the association asking a series of questions about its governance and financial affairs. The committee itself has yet to meet.

The Irish Examiner reported that Cabinteely chairman Larry Bass and Shelbourne owner Andrew Doyle sent the original letter in March and that Doyle emailed board chairman Roy Barrett last week to ask why the “material governance issues” raised have as yet not been addressed.

Catherine Murphy TD raised the issue of how the association is being run at present with Shane Ross on Thursday evening. The Minister said he stood “four-square” behind Barrett and though neither Bass nor Doyle could be described as part of the “old guard”, suggested that “reactionary forces” are at work around the association.

Ross said that the terms of the Memorandum of Understanding (MOU) agreed between Government and the FAI in January are “rock solid” and he seemed to suggest that it would be ratified on July 6th. In the meantime, an advertisement appears in Friday’s recruitment pages of The Irish Times inviting applications for the position of chief executive at the association.

1 Jim McGuinness: There is a way to save championship and make it competitive
2 Waterford turn Kilkenny upside down and inside out
3 Waterford’s frenzied waves of attacks too much for Kilkenny
4 Sordid murder of hurling brothers still resonates in south Galway
5 Ireland’s work-ons: Four things Andy Farrell needs to address
Real news has value SUBSCRIBE
Crossword Get access to over 6,000 interactive crosswords