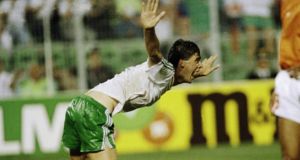 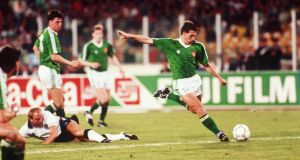 Jack Charlton was never a man to covet the kind of adulation normally reserved for film stars and athletes of less obvious physical attraction, who can wither opponents with the tiniest adjustment of a football.

With the pragmatism of a coalminer’s son, he soon realised that the spoils of success had to be earned the hard way. Moral victories were no substitute for the real deal – hard luck stories belonged more properly to the pages of fiction.

And yet this vaguely improbable man, with few of the attributes that normally attract people to a cause, won the hearts of the masses like no other in the history of a race that has rarely been slow to celebrate the achievements of its sporting heroes.

The testimony to his term in charge of the Republic of Ireland’s national football squad is that, in spite of winning no silverware of note in almost 10 years of trade at the highest level of the game, this tough, grizzled man from Northumberland, who loved young children like few others of my acquaintance, endeared himself to Irish people of all age groups.

“To help secure the World Cup for your native country is the dream of every footballer and after the drama of England’s win over West Germany in the 1966 final at Wembley Stadium, I thought I would never again experience such a high.

“But I was wrong. My time with Ireland was in many respects every bit as good. For one thing, I got to pick the team and to participate in the finals of three major tournaments in the space of just six years, was, for a comparatively small country, something of a miracle,” said Charlton.

“And it wasn’t just about the football. It was the way the people of Ireland got behind the squad on good days or bad on the pitch, never wavered in their support of the players. And I like to think that through it all, my players and the men and women who came to cheer them on their travels in many countries, were the best ambassadors, any country could have had.

It hadn’t always been thus. Charlton, the first “outsider” to manage an Ireland squad, was embroiled in controversy at a press conference called to announce his appointment and the early results did nothing to soothe the feelings of those who believed that the vacancy caused by Eoin Hand’s departure should have been filled by any one of four former Ireland players interested in the job.

Soccer journalists too were far from convinced the embattled FAI council had got it right. On the first anniversary of the appointment, the Irish Times was moved to observe that “the waters of discontent are lapping at the doorsteps on the new management team”.

But all that changed after a Scot named Gary McKay uprooted Bulgaria in Sofia and on the back of a hugely gratifying campaign in the finals of the European Championships in West Germany in 1988, the players and media of a nation were united in the cause.

Thirty years earlier, the entire Irish entourage, players, officials, media personnel and supporters for a non-competitive game abroad could on occasions be accommodated on just one coach after setting down at the nearest airport.

It was in that era that I once fielded a phone call from a woman in London, enquiring where she could purchase tickets for Ireland games for herself and her children.

Sadly, that climate of intimacy was soon lost in Ireland as well. After their spectacular progress at Euro ’88, they were now viewed as realistic contenders for a place in the last eight in Italy. And with Charlton, alone of the assembled managers, ready to pronounce on controversial issues such as kick-off times and water breaks for players in the intense heat, his daily conferences attracted a large international presence.

Soon demarcation lines between players and journalists were introduced and reporting on Ireland games was never quite the same again.

In those circumstances it was perhaps just as well that the ‘colour’ writers hadn’t yet joined the party for the pre-championship warm-up in Malta where an outraged coach driver once threatened a minor international incident.

Once the tournament got going, and after all three group games against England, Egypt and Holland ended in draws, the way was clear to that imperishable evening of drama when our first ever penalty shoot-out in a World Cup ended

Sitting with his assistant Maurice Setters beneath a giant oak tree in the garden of the team hotel, Charlton articulated his greatest fears on the eve of that game.

“With a Portuguese referee, it will take a broken leg to get a free inside the Italian half of the pitch” he opined. “And I’m haunted by the thought that we’ll be ‘done’ by a silly error.”

He was right on both counts. Silva Valente did neither team any favours with ultra strict refereeing on the night and Kevin Sheedy’s error in playing a risky pass to John Aldridge, albeit a long way from Packie Bonner’s goal, invited the spectacular counter charge which culminated in Toto Schillaci pilfering the decisive goal for Italy.

The spectacle of Bonner bending into his net to retrieve the ball provided a sad epitaph for an adventure without parallel in Irish sport.

But the enduring memory for many supporters in Rome will be that of the management team orchestrating a raucous night of song and story for the fans thronging the Spanish Steps area of the city shortly after their arrival there. Happy days!

Peter Byrne was The Irish Times soccer correspondent from 1973-2000

1 Shels chairman Andrew Doyle hits out at ‘appalling’ FAI governance
2 Heroic insanity: When Michael Dunlop raced home in memory of his father
3 Players focus more on life outside game due to lockdown, says GPA
4 No point forcing people to take a knee, says Anthony Watson
5 Follow the money: How FBI and IRS teamed up on Fifa
Real news has value SUBSCRIBE
Crossword Get access to over 6,000 interactive crosswords