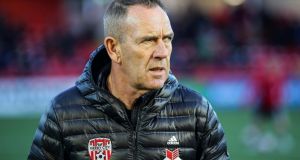 Kenny Shiels has been appointed as manager of the Northern Ireland women’s team. Photograph: Lorcan Doherty/Inpho

Kenny Shiels has been appointed as manager of the Northern Ireland women’s team, with the 63-year-old unveiled by the IFA at a lunchtime press conference in Belfast on Thursday.

The former Coleraine, Distillery and Ballymena United player spent three years in charge at the Brandywell where he led City to success in the League Cup last year, but he left at the end of the season as results slipped and the club failed to secure a place in Europe.

A consistently outspoken character he seems, on the face of it, an unlikely choice for his new job but he does, as IFA chief executive Patrick Nelson said while making the announcement, bring “vast experience,” to the role.

Amongst the many management jobs he has held was a stint in charge of the Northern Ireland Under-17 team, just over a decade ago, while he had two years as manager of Kilmarnock in Scotland where his son Dean also played.

The Northern Ireland team has been drawn in a qualifying group with Norway, Wales, Belarus and the Faroe Islands fur Euro 2021 with the campaign scheduled to get under way on August 30th at home to top seeds Norway.

Though he says he is targeting it, qualification would be a remarkable achievement - Northern Ireland finished 10 points adrift of the Republic of Ireland in their recent World Cup campaign, finishing up with just three points and losing both home and away by three goals to the Norwegians who topped the table - but Shiels will be expected to generate an improvement at senior level as the IFA looks to invest in a recently launched new women’s and girls’ development plan.

“I believe that the foundations are now in place to enable women’s football in Northern Ireland to move to the next level,” said Nelson at Shiels’ unveiling. The manager said he was “proud” and “hugely excited” to be handed the role.

1 Ireland suffer Twickenham torture yet again as England dominate
2 England 24 Ireland 12: How the Irish players rated at Twickenham
3 Eddie Jones’s comments have already provided Irish team-talk for 2021
4 TV View: Sunday Bloody Sunday . . . Not Bono’s fault but Boy, that was Bad
5 England held all the aces in defining battle of the breakdown
Real news has value SUBSCRIBE
Crossword Get access to over 6,000 interactive crosswords