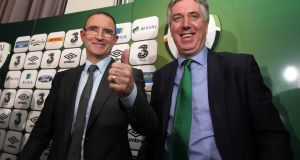 Martin O’Neill with FAI CEO John Delaney. Both sides should decide if the current relationship is to continue. Photograph: Donall Farmer/Inpho

After last November’s derby defeat a seething Manchester United fan glowered from under his hood and delivered, right outside Old Trafford and on camera, a magnificent if salty-tongued tirade against Jose Mourinho and the gilded millionaires in the luxury dressing room.

“We’re not f***in Stoke,” he fumed at one point, spluttering over the very idea.

The Lancashire outrage within that phrase has echoed through this week’s bizarre love triangle featuring the Republic of Ireland, Martin O’Neill and Stoke City FC, after which nothing much has changed and everyone is left feeling mildly insulted and cheapened.

Republic of Ireland fans could feel insulted that Martin O’Neill was, according to many reports, ready to walk away for perhaps a mere half-season with the Potters without a backwards glance. There was an unspoken disbelief not so much that O’Neill might quit his post for a Premier club role but that he would leave Ireland for, well, Stoke – which, of course, is a slight on Stoke City FC and the outer boroughs along the Trent.

O’Neill, equally, can feel insulted that anyone would believe that he would renege on his verbal agreement with John Delaney to remain in charge for another campaign. He might also feel slightly aggrieved and hurt at the absence of a deafening public chorus begging him to stay.

John Delaney and the FAI can feel outraged that an English club would so brazenly and openly line up their man, leaving them powerless to do anything about it. Ireland football fans can feel angered by the FAI’s dithering for two months over actually securing the signature of O’Neill on the line that is dotted instead of leaving the position floating on the vague notion of a handshake.

Roy Keane, meantime, could feel miffed at the fact that he was portrayed as a sort of orphan in the whole charade, who would only remain in Ireland as new manager if O’Neill couldn’t secure him a place on the Stoke ticket.

And finally, Stoke City’s revelation that, actually, the manager they really want is Quique Sánchez Flores could be interpreted as a sweeping insult to Martin O’Neill, to Roy Keane, to the FAI and to Irish football in general. Call it Stoke’s revenge.

Indeed they are and good luck to them. The world moves on. When word broke that O’Neill and Keane were, in fact, flying into Dublin for Friday evening’s Soccer Writers Association of Ireland awards banquet, it was interpreted as a full stop on the intrigue.

Both O’Neill and Keane would appreciate the irony of their attendance. One minute you’re supposed to be getting Stoke City ready for Monday’s evening big game against “Man f***in United”, the next you are regaling the Irish football media with tales of the Forest years over late night brandies. It’s a funny old game.

Except, of course, that it’s not.

There was something oddly hollow about the ongoing would-he-stay-or-would-he-go tease. There is no question that everyone – management, association, team and fans – is still feeling fatigued and drained after the thumping 5-1 World Cup playoff defeat to Denmark. James McClean’s teary post-match interview was a lasting reminder that for all their limitations, for all their their staggering ordinariness, those players are limitlessly committed to the idea of playing for Ireland.

You can’t ask for more. Afterwards, everyone wanted to forget about the boys in green for a time and football fans returned to the Premier League. But that was their luxury. In the empty months, it behove John Delaney and Martin O’Neill to formalise their agreement, draw up and sign a new contract and begin to put together a plan to develop the international side over the next two years.

Why hasn’t this happened? On the night of that Denmark defeat, anyone present at O’Neill’s post-match conference could detect a kind of hesitancy at work in his mind. The Derry man is brilliantly shrewd and wears his 40 years of elite football experience lightly.

But it would have been understandable if that 5-1 drubbing – and the sharp critical reaction – had unnerved him a little and made him stop to consider if he wanted or needed another two years of grinding out results, of constant criticism of his tactics and of how his teams play, of the long periods of inactivity, of questions about Wes.

It would be understandable, too, that a chance to pit himself against Guardiola or Mourinho; to experience again, at the age of 65, the weekly thrill and roar of the English football winter, might have been irresistible. There is, of course, no confirmation that O’Neill ever so much as took a phone call from Stoke representatives, let alone sat down for ‘talks’.

But if O’Neill was truly, madly, deeply committed to the idea of another two years with Ireland, wouldn’t he have signed by now? Securing O’Neill and Keane was a deft piece of work by the FAI. They are two of the most extraordinary football people this island has produced and both have had the sort of starry football careers that future Irish players are unlikely to emulate.

Roy Keane remains one of the totemic figures of the Premier league age. O’Neill was once regarded as the one of the hottest managerial tickets in English football, tipped as Alex Ferguson’s successor. But English football has changed radically since then: the money is vast, the turnover of stars is swift and the atmosphere is cut-throat. It’s big business with football as the front-of-house theatre. Managers exist under a savage scrutiny.

Who knows whether O’Neill and Keane thirsted for that? How close they did or did not come to setting up shop in Stoke may never be revealed and doesn’t really matter.

What matters is what happens now. The worst outcome would be a sense that O’Neill is stuck with the Republic of Ireland team and Ireland with O’Neill. The Irish players and supporters deserve better.

Ireland achieved some amazing results and have been remarkably competitive under the Derry man. But for all that, there has always been a sense that O’Neill has held something of himself back; that he isn’t fully convinced Ireland is the team he should be managing.

Stoke City have inadvertently done Ireland a favour. It’s high time for John Delaney and the FAI to agree terms with O’Neill either way instead of sitting paralysed with fear that they won’t be able to replace the O’Neill/Keane ticket with anything like the same star power or reputation.

They owe it to their public to clarify who is managing the Republic’s team. And it’s time, then, for O’Neill to throw himself into this next campaign by summoning all of that formidable nervous energy of his for one more and possibly one last burst at defying the odds – if , indeed, that is what he still wants.

That’s the question he must surely have been turning over in his mind as he passed the medley of vegetables last evening and maybe exchanged a wry grin with Keane.

Is he up for this?

Or has the time come to say thanks and all the best and to sit back on Monday night and watch United versus Stoke without a care in the world?