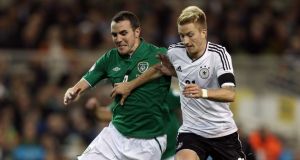 John O’Shea expects the new managerial pairing of Martin O’Neill and Roy Keane to pay immediate dividends for the Republic of Ireland when they meet their squad for the first time next week.

Sunderland defender O’Shea is in the 27-man group for next Friday’s friendly clash with Latvia at the Aviva Stadium and the trip to Poland which follows four days later.

The ex-Manchester United man, who played for O’Neill at the Stadium of Light and alongside Keane at Old Trafford, said he cannot wait to report for duty.

“I know both of them very well and if they have spoken to each other beforehand and decided they want to go forward together it can only be good really.”

The appointment of the pair caught many observers by surprise, and while there has been plenty of speculation about how the two characters will work together, O’Shea is confident they are on the same page.

“I had spoken a couple of times to Martin who said he had spoken to Roy during the TV work they had done together in the past so I knew the type of ideas they both had and that they enjoyed their conversations,” he said.

“I knew that was never going to be as big an issue as people have made out. It can only be good because of the type of personalities they are in terms of winning mentality, drive, hunger and motivation — all those things are needed for us to get going again for qualifying for tournaments again and giving a boost back to the fans as well.”

Keane walked out on the Ireland squad as a player after a falling out with then-manager Mick McCarthy on the eve of the 2002 World Cup, but O’Shea is adamant his presence will be a big positive in the dressing room.

“Roy is arguably Ireland’s best ever player so having him in the dressing room for the younger lads and older lads to look up to and thinking that he is on our side wanting us to win,” he said.

“And we have Martin’s experience. He will be the boss, he is the main man and we will be guided by him and the team he has in place and from knowing the two men and having them on our side it is going to be brilliant.”