John Delaney will not face Oireachtas questioning amid scandal

Following a private meeting in Leinster House it was decided against 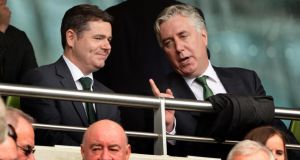 FAI chief executive, John Delaney, will not face Oireachtas questioning about the five million euro pay-off from Fifa for a Thierry Henry handball which cost the Republic a World Cup place.

The money was classed as a loan and used to pay of debts for the redevelopment of the old Lansdowne Road into the Aviva stadium.

Mr Delaney was facing the prospect of a potentially tricky Q&A in front of a parliamentary committee over his handling of the secret deal, even though the FAI is not regulated by the Government.

But following a private meeting in Leinster House this morning a spokeswoman confirmed: “The Committee have opted not to ask the FAI to appear.”

While the FAI is not governed by the Irish parliament, the organisation receives millions in grants for the development of the game.

Part of that is more than €2 million administered through Sports Council grants for the grass-roots game as well as hundreds of thousands in grants paid directly to clubs and not handled by the FAI.

Mr Delaney has not answered any questions publicly since the revelation but the FAI issued a lengthy statement outlining the chronology of the Fifa pay-off and where it was recorded in its accounts.

He disclosed last week that the €5 million was secured from Fifa after a heated exchange with Mr Blatter in his office and the Fifa boss joking that the Republic sought to be team 33 at the World Cup in South Africa.

Mr Delaney claimed the money was paid to stave off a threatened a lawsuit against Fifa after officials missed the double handball by Henry to set up a goal for William Gallas.

Such a courtroom claim would have been unprecedented in soccer history.

The terms were originally confidential, the FAI has said, but the money was also due to repaid if the Republic qualified for the subsequent 2014 World Cup.

Mr Delaney went on the offensive ahead of being called to the committee by contacting members to state that he had nothing to add to the detailed FAI statement on accounts from 2010.

He also reportedly told some politicians that calling him before a committee would do more harm than good to the team’s prospects of Euro 2016 qualification with Ireland playing Scotland on Saturday afternoon in Dublin.