Italia ’90: The nation holds its breath

On this day 25 years ago David O’Leary sent Ireland into the World Cup quarter-finals. Mary Hannigan imagines what went through the player’s head as he took that decisive penalty kick against Romania 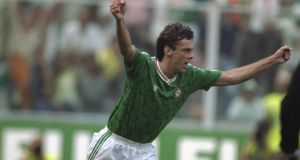 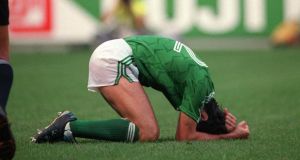 David O’Leary of the Republic of Ireland drops to his knees after scoring the winning penalty against Romania. Photograph: Billy Stickland/Inpho 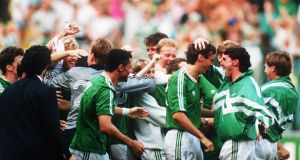 David O’Leary is mobbed by his Republic of Ireland team-mates after scoring the winning penalty. Photograph: Billy Stickland/Inpho

It was back in 2013 that I got a text message from a pal who had just heard about me being awarded €4 million in compensation from Dubai’s Al Ahli after they unjustly sacked me a year in to a three-year contract, despite winning six of my 15 games in charge. Leeds would have an open-top bus parade if they had a record like that these days. My dismissal rocked United Arab Emirates football to its, as I say, core.

I had no clue what WTF meant. For a long time, for instance, I thought LOL was my uncle Larry.

So I asked him to explain. He did, and by way of example:

“Remember Big Jack’s face when he saw it was you who was stepping up to take that penalty in Genoa?”

“That was history’s ultimate WTF.”

Sheedsie, Houghtsie, Townsie and Cas had scored our first four pens. The contenders for the fifth were Chrissie Morris (“washing my hair”), Mick Mc (“sorry, ‘eadache”), Kevsie Moran (“would love to, but gotta collect the kids from school”), Paul McGrathsie (“me bus leaves in a minute”) and Quinner (“aaaaah, cramp”), so it fell to me. Cometh the hour, cometh the man, and seeing as an hour is about all the playing time I got in the Big Jack era, I was determined David O’Leary was going to stamp his, as I say, mark on history.

I was confident. After all, even Cas had scored past Silviu Lung, despite his left foot making so meaty a contact with the Genoese turf, before it brushed the ball, it was like a plough in heat. When he returned to the centre circle he declared, “Audentes fortuna Iuvat!”

Video: David O'Leary's penalty like you've never seen it before

I strode towards destiny, my serenity on that walk from the centre circle to the penalty area interrupted by a loud cry of “WTF?!?” in a Geordie accent. As I say, I didn’t know then what Jack meant, so I strode on.

The ref was a little pernickety about where I placed the ball, but I explained to him that Cas had kicked the penalty spot out of the stadium so it wasn’t easy knowing where to put it. He understood and backed off.

Not even Silviu wobbling his legs in a Grobbelaar-esque manner diminished my fortitude. The strains of Colm CT’s This is the Moment filled my head, Reeling in the Years would be playing me on a loop.

Fuji Film was the advertising board over Silviu’s right shoulder, but David O’Leary is not a snapper, he prefers a close shave, and only the year before, me and Tony Adams were so moved by that Gillette ad tune, we duetted it at the Arsenal Christmas party:

Where the race is run,

Gillette, the best a man can get!”

And here was Gillette looking at me in Genoa. Serendipity. So, I aimed for the second “L” over Silviu’s left shoulder.

I turned, dropped to the soil, then rose, raised my arms, like a Jesus, and intended sprinting towards Jack, but was submerged by compatriots.

To this day I’m picking parts of Mick Byrne out of my ear.

The moment? The best a man can get.