Italia 90: ‘It was a more innocent time then’ 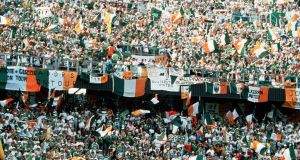 Republic of Ireland fans soak up the atmosphere.

He’s been to 130 Republic of Ireland away matches, every major tournament the ‘Boys in Green’ have ever been to and he’s spent an estimated €400,000 watching Irish sport around the world. He was in Sydney in 2000 to see Sonia O’Sullivan claim a silver medal and watched as Katie Taylor made history in London three years ago. He’s watched the international debuts of Robbie Keane, David O’Leary, Paul McGrath and Roy Keane while travelling to watch Ireland play in almost every country in Europe and more worldwide.

Just three weeks ago he returned from the Uefa Under-17 Championships in Bulgaria. To call Jim Ryan a pillar of Irish sport for almost the last 40 years would be to put it mildly. The retired Garda from Cork is surely the perfect man to talk to about a fan’s experience at Italia ‘90, then.

“It was a more innocent time then. You’re almost just waiting for trouble nowadays. It’s not as good as it used to be,” he says when asked about the difference in supporting a team at a major tournament then and now.

It was more of an ordeal to get to the tournament 25 years ago.

“We went on a charter and ended up staying in a place called Scopello, outside Palermo. We thought we were in Palermo but we were actually about a mile up a mountain and an hour away so every day we had to pack and leave to go away for the day. The travel agent kind of caught us really; I suppose we were naive then.”

With Jack Charlton’s side playing Egypt and the Netherlands in their second and third group games in Sicily, it was the perfect place for Irish fans to base themselves. However, the first game – against England in Sardinia – proved somewhat more difficult to get to.

“It had been arranged that we’d all go by catamaran which would take about four hours, but in reality it took eight or nine hours. The match was at nine o’clock but we only arrived in Cagliari at half seven.”

Hopes of making it to the match on time were fading fast but Ryan and his group of fellow supporters weren’t going to give up that easily.

“I stood in front of a bus to get it to stop and asked him to take us to the stadium, which he did believe it or not. So we arrived in good time then.”

With the ensuing drama of Kevin Sheedy’s late goal to bag Ireland a point, a smooth trip back to Sicily would have been graciously welcomed by the Irish fans. Things, unsurprisingly, didn’t go quite as planned.

“After the game we got back down to the catamaran again and set off but the radar broke on it so we had to be towed back to Cagliari where we stayed for the night. The following day it chugged along with the other catamaran without radar or anything so it took a full day to get back to Palermo.”

Sadly the call of duty from home meant Ryan couldn’t make it to the second round game against Romania or the quarter-final with Italy. So where does Italia ’90 rank for a man who has more experience than anyone in following Ireland at major tournaments?

“Nothing will compare to Germany in ’88 because it was our first tournament. It’s a bit like your first child, you’ll never forget it.”