Ireland squad not worried about Rice or Arter – Clark 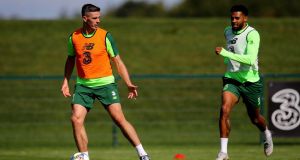 Ciaran Clark says that he and the other members of the Irish squad are too preoccupied with Thursday’s opening Nations League game against Wales to worry about what either Declan Rice or Harry Arter decide to do in relation to their international futures.

The news that 19-year-old Rice had asked for more time to decide his allegiance, “came out of the blue,” with the West Ham player having not suggested to any other squad member back at the start of the summer, apparently, that he had any doubts.

“I haven’t spoken to him,” said Clark who opted for Ireland at a time that there was interest from the English FA. “Obviously he’s got some things that need to be sorted. But he’s still a young lad. He knows what it’s like. He knows the set-up. He enjoyed his time here. He knows everything about us; he has played brilliantly a couple of times. But it’s up to him now and we’re not thinking about that at all. We can’t. That’s all off-field stuff now, it’s not our focus.”

The 28-year-old insisted that he never had any doubts about his decision or any regrets after it had been made. “It was pretty straightforward to be honest,” he said. “It was something I was looking forward to do and it was great when it happened.

“It’s a good bunch of lads,” he continued, “it always has been. We’ve always had a bond; the attitude and character here is great. So it was pretty easy for me to settle in and get straight into it.”

The Newcastle United defender said he was unaware of the reasons behind Arter’s decision to stay away either. “Maybe personal reasons, I don’t know. I haven’t spoken to him either. We’d love him to be here but it’s one of those things. He’s not. We’ll concentrate on the game now; we’ve only a few days’ training.”