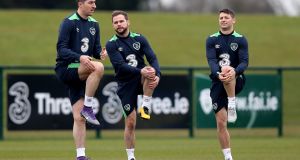 D-Day is, it seems, approaching at last for Alan Judge, the Brentford midfielder who is expected to make his senior international debut for Ireland in the next six days.

At 27, though, and after a couple of false starts, the player is reluctant to take anything for granted and he reacted coolly enough to the news that Martin O’Neill has already said he would play.

“Oh, that’s nice to hear,” says the former Blackburn Rovers and Notts County midfielder. “I’ll look forward to it if it happens. I seem to be getting closer each time. I made the bench last time [away to Bosnia and Herzegovina] so we’ll see what happens. It will be great if it happens.”

Brentford fans have long since thought that Ireland’s manager has been missing a trick by overlooking the man most regard as the club’s best player, but Judge believes that it may be his switch to a more attacking role with the Championship side that has finally helped catch the manager’s eye.

“Last year, I was playing a completely different role,” he says. “I was playing alongside Jonathan Douglas as a defensive midfielder. Now, I’ve pushed on, playing off the front man. That’s allowed me to add more goals to my game. Maybe that’s the reason.

“The manager did have me in the squad before though; for the England game last summer. So maybe it was coming.

“It’s always good to have versatility,” he continues. “I can play on the wing too but I think I’ve proved this season that playing off the front man is my best position. I know some managers don’t play with a free-role player, some people call it a luxury player’s role, but I try to add working hard off the ball too. Hopefully, that gets noticed.”

His numbers for this year, 14 goals in 36 appearances, are certainly eye-catching, but then former manager, Mark Warburton, seemed to quite like the old, more defensively oriented Judge.

The 53-year-old tried to bring the Irishman to Rangers when he took over there following his controversial departure from Griffin Park.

“He was the reason I went down to Brentford,” he says. “I’ve a lot to thank him for and I’d really look forward to working with him in the future if that’s possible.”

Asked if that desire for a reunion might take him north of the border too, he laughs. “No,” he says, “I wouldn’t be going to Rangers, not a chance. I had that call in the summer and I went ‘are you kidding me?’ I’d get killed if I went up there! Just if he ever moves on, he’s a manager I’d like to work with again.”

He expects to move on in the summer, it seems, with the club not making any particular effort to tie him down beyond the end of a contract that runs out in 2017. Both sides have perhaps concluded that they can do well out of a deal.

There was Premier League interest in August, when the risk of jeopardising whatever progress he’d made on the international front was a factor in his decision to stay put.

However, he’s eager to progress, most immediately on the international front where a first cap this week would keep alive his hopes of squeezing into O’Neill’s squad and fulfil an ambition to play at Lansdowne Road.

“I don’t want to get ahead of myself,” he says. “I just want to keep doing what I’m doing, do what I can do for Brentford. I’ve loved every minute down there and I owe them a lot.

“My main focus here and now is these 10 days and then I’ll get back to Brentford. We’ve slipped towards the relegation zone, we’re only six points outside it so we’ve got to get out of that first.”

Anticipation of an Aviva appearance is fuelled by the talk back home of his father Dermot’s big day out there in 1990.

“He was always there to help me,” says Judge, “as have all my family. So I have been lucky.

“It would be nice; my dad played there in 1990, the FAI Cup. He won it there [with Bray Wanderers] so it would be nice to finally get on the pitch if I can do it there.

“It was the peak of his career. He was the first captain to lift it there, that’s a nice thing to have and I would be proud to get on the pitch. I was only two at the time, I was the mascot. I have seen the photos and it’s nice to have that memory.”

It would be nice too, of course, to lay one down of his own.

1 Farrell and O’Connell provide insight into changes in Ireland’s analysis
2 Sideline Cut: Vignette shows why Bird is the true shark in The Last Dance
3 Anfield and Cheltenham show sports again lacking in looking after their own
4 Andrew Porter diary: Meat, veg and intermittent fasting the order of the day
5 Dr Bob Rotella: ‘If you focus only on the target you’ll play darn good golf’
Real news has value SUBSCRIBE
Crossword Get access to over 6,000 interactive crosswords