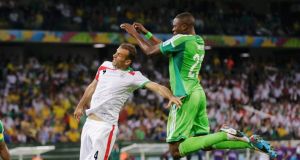 It was a game that lived up to expectations – no goals, stodgy football, sadly matching the reputations of a defensive Iranian side and African champions who aren’t quite there.

The Super Eagles dominated possession but their control was only partial, they had few ideas, and you felt they would do better against a less defensive team that they could get in behind. We will soon find out.

With two tougher games to come, the Nigerians’ onfield disappointment at full-time told a tale of an opportunity lost, and raised fears for another disappointing campaign.

Iran were very limited, but worked with such energy and honesty that they were value for the point, and there was always hope they might nick three from a set-piece.

More vindication for the methods of Carlos Queiroz, if you could say anything so generous about this match.

Above all the result opens up the group again for Bosnia, who will fear nothing they saw here and will now see blinking lights marking out a way to the second round.

Curitiba is one of the wealthiest, shiniest cities in Brazil, with an unusually efficient transport network that implies they would know how to join up a Luas line or two. All morning Iranian and Nigerian fans hung out its grand central streets, honking horns, shaking hands.

Streets closed near the ground, officers in pristine uniforms. No one else may have cared, but it had the atmosphere of the grand occasion.

From the whistle the game panned out as planned – all Nigerian athleticism and Iranian discipline. The very fabric of Iranian football had been questioned in recent months – quite literally, in a high-profile dispute about the material used in the national kit – but Queiroz in recent weeks had prepared his men on the training pitch.

What his formation lacked in ambition it made up for in tidiness, everyone manfully filling in behind the tireless running of Charlton striker Reza Ghoochannejhad – “Gucci”.

For all the defending his team had done, Gucci had the best chance of the first half, turning in a header from a Dejagah corner that goalkeeper Enyeama had to stretch and palm away.

Although Iran had been feeling their way into the game the moment was something of a surprise. Nigeria had begun well and Iran looked unused to the pace of the African champions. Victor Moses was especially dangerous wide left, and an early goal was disallowed for a foul after a corner from that side.

In that period Fenerbahce’s hulking striker Emmanuel Emenike laughably outmuscled Jalal Hosseini and crossed only for Musa to be denied a shot, and Onazi to strike the follow-up wide. It emphasised Iran’s struggle to stay afloat.

But even with Nigeria well on top there was something to admire in how the Iranians went about their business, as well as a worrying inability by Nigeria to play through crowded lines.

John Obi Mikel lined out as a deep playmaker but there were few options through the middle. Once Iran coped with crossfield balls to wide positions, Nigeria had nowhere to go.

Confidence high after the early battering, Iran sniffed a chance of three points in the secdond half. It never got exciting but for 20 minutes it did become interesting. Gucci pulled Nigeria around and the wide men scampered about. Nigeria, to be fair, went closest – Emenike firing wide on the turn. Later on a couple of headers under pressure over the bar: that sort of thing. Plenty to forget.