Goals aplenty but where to start in Brazil? 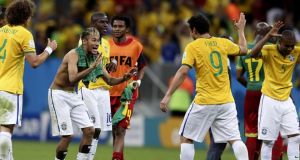 Neymar (shirtless) of Brazil and Fred celebnrate after the FIFA World Cup 2014 group A preliminary round match between Cameroon and Brazil. Photograph: Marcelo Sayao/EPA

What a weekend! Pick your highlight: Costa Rica bidding cal-ciao to England with victory over the Azzurri? Ghana and Portugal overcoming Germany and the MNT’s Tschüßball to ensure Group G trundles on? Maybe Messi’s injury-time lance through brave Iran’s heart?

Pick only one. I dare you. A pox on the Bangles, this isn’t just another Manic Monday. Today could exceed Sunday, which saw 11 goals in only three matches. On the twelfth day of Christmas—ahem—the World Cup, the round dozen would fit snugly.

Simultaneous kick-offs signal sorrow for those of us whose wireless Internet is patchier than a fourteen-year-old’s mutton-chops: massive cataclysmic encounters hidden on iplayers, out of reach.

Combined with ‘cashflow interruptions’ which have blocked digital service, the result of a weekend getting fleeced by betting syndicates, I’m on RTE for the duration. The box, no matter how hard I try, just doesn’t want to tune to ITV. Aw shucks, isn’t that the luck.

Group B to start, with the Netherlands and Chile clashing to decide who gets to eliminate Brazil in the round of 16. Van Persie is suspended so Robben takes the armband while Juve’s Vidal is rested for knockout fitness’ sake. Chile con carnage or a bottle of lukewarm Hollandaise? Let’s find out.

The first Dutch line-up without a ‘van’ since 1996 and, boy, do I wish someone had brought the Hiace.

Stodgy first half, the ball blurted about the middle third with few chances. Kuyt and Blind doubled at leftback, containing Alexis and Isla.

That flank overloaded as a result with clucking midfielders who nipped the ball away and ran into one another for three quarters of an hour. Jaysus. The Aussies are trailing Spain at the half, a slick David Villa backheel the difference.

The Derby of the Vibrant Colours, a contest of Oranje and Roja, never sparkled; persistent fouling and midfield slog the twin dampeners.

Van Gaal’s flexibility triumphed, eventually, while Sampaoli must worry that other sides can neutralise his charges as the Dutch managed today. Spain cantered to bronze in Curitiba, winning three-nil over the fatigued Socceroos with second half goals from Torres and Juan Mata.

A liquid dinner of gazpacho and Grolsch was interrupted by a phone-call from Macklin-Yates Arrears Recuperation Services (M-Y ARS, for short). A preliminary only, they assured me, the contact was simply to make sure I knew that they knew I owed their client, the digital television people. Jeepers, Broke Lad will have to hibernate a while.

On to Group A, Brazil hope to offer a capital display against Cameroon in Brasilia. I’d watch Croatia and Mexico duel there being only a hint of a sliver of a chance they could either come second or get knocked out.

Cameroon have been worthless this time round, an inverted spectre of Roger Milla’s swashbuckling Indomitables of the early nineties. Scolari’s question isn’t ‘if’ but ‘by how much’ his side will win.

The Selecao are penetrating at will and so are Cameroon. What must Thiago Silva think of PSG’s decision to purchase David Luiz? More sock and hard place than rock and hard place, if Blanc decides to partner them.

Very little defensive nous in either side, Cameroon the more vulnerable in a game chock-full of possession turned over passing from the back. Ronnie’s embarrassed in studio: ‘without Neymar, they’ve [BRAZIL]got nothing.’

Two goals for the young maestro, both times profiting from Cameroon dawdling in their own third, his first was the 100th of the finals. Matip’s equaliser for the Indomitable Lions was their veryfirst of the tournament. Scored one, conceded seven... yikes. Croatia-Mexico is deadlocked at nil apiece. Fulltime: Cameroon 1 – 4 Brazil.

So that’s fourteen in total today. A Brazilian dozen we’ll call it: two extra, to be sure to be sure. Peter Collins on RTE 2 is congratulated for maintaining an eye-scrunching average of four plus goals a match. ‘We’ve been very lucky with the games we’ve been chosen to call,’ says himself, modestly. Remember the name: Collins means goals.

Brazil needed scores going into the next round. Shambolic in midfield and absent, Thiago Silva aside, genuine defenders, they will concede and need to overawe their opposition up front.

Four-one victories ring a sweet bell in the host country, Carlos Alberto’s zooming contribution to the 1970 final worth dredging to the surface. A different era, Chile should overcome Brazil in 2014’s second round.

Mexico beat Croatia three-one, a captain’s knock from Rafael Marquez with a goal and an assist. Failing to exceed the goal difference, Mexico came second and meet the Netherlands in Fortaleza on Sunday. Messi and les Bleus on Wednesday, à bientôt!