Georgia’s form on the road points towards Ireland win 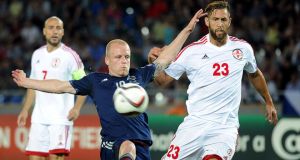 Given how much attention Ireland’s inability to beat better ranked sides in qualifying gets, it is perhaps worth mentioning another historical truism: in Dublin teams of Georgia’s standing have pretty much always been beaten when it matters. Failure to maintain the trend on Monday night will leave Martin O’Neill and co. with no cause for complaint if Ireland then fail to secure at least a play-off place in the wake of Scotland’s Tbilisi trip.

Montenegro and Cyprus were the last two “minnows” to visit Ireland and depart with a point although the former were just starting their ascent of the world ranking ladder and both games were, in any case, dead rubbers. More pertinent, perhaps, is the 2-2 draw with Israel a little over a decade ago which actually ended up costing the team a play-off place. The opponents that day were ranked around about 100 places higher that day than Georgia are now. For all the flaws in the Fifa system, that represents a significant difference.

The bottom line is that Georgia may indeed be, as Friday’s game seemed to suggest, a good deal better than their current ranking of 147 (they are notionally the fifth worst team in Europe at present) suggests, but their miserable record on the road only adds to the burden of expectation on the home side here.

One win their last 22 competitive away games provides a sense of the scale of the challenge facing new coach Kakhaber Tskhadadze as he tries to build a head of steam for next time around. Notionally something could still be salvaged this time around but the former Manchester City player dismisses that idea.

“There is a theoretical chance but we are not dealing in virtual reality,” he says. “We’re trying to win every game and trying to use this game as a way of helping us towards qualifying next time around. Scotland was a very tough game after which we had a seven hour flight so we’ve spent our time since recovering.

“We know how motivated Ireland will be in their own ground because they now have a chance of playing at the European Championships but if we have everyone fit and our players perform as we intend them to then we can again perform well, that is our target really.

“Everything depends on the situation with the players,” he continues. “There are some minor injuries and we will have to see how they are tomorrow but whatever happens we will try to get a goal.”

When Ireland last faced the Georgians, a year ago, their ambitions were rather more immediate and substantial with hopes high that under then manager Temuri Ketsbaia that they could get themselves into the final shake up for the play-off place this time around. Aiden McGeady’s two goals in Tbilisi more or less put paid to that.

“We had a lot of motivation in the beginning but we started poorly,” acknowledges Empoli striker Levan Mchedlidze, who was their most impressive player against the Scots, “but under the new coach there has been a dramatic change of style and strategy. We attempt to attack more and there is more freedom for the players to express themselves.”

That may suit Ireland well enough with the visitors perhaps showing a greater sense of adventure than if getting a result in Dublin had an impact on more than their pride. That, though, may be a factor, particularly for any of the visiting players who remember the February 2009 encounter in which the visitors took an early lead only for the home side to get back into things thanks to a hugely dubious Robbie Keane penalty. In the end, striker added a second from play to secure a lucky win.

It’s far from the only time Irish teams have scraped through against weaker opponents on home soil before but, crucially, they generally win in some way or another and that, first and foremost, will be the target again on Monday.