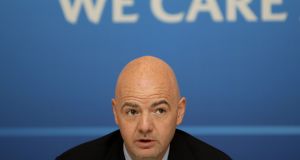 Gianno Infantino has been dragged into the Panama Papers affair. Photograph: Epa

MPs and Fifa reform campaigners have called for an urgent investigation into questions raised by a decade old TV rights deal that has dragged the new president of world football’s governing body into the Panama Papers affair.

Files seen by the Guardian raise questions about the role Fifa’s recently elected president, Gianni Infantino, played in deals that were concluded when he was director of legal services at Uefa, European football’s governing body.

Uefa has denied any wrongdoing by any of its officials or any other marketing partner. Infantino said on Tuesday night that he was “dismayed” by any suggestion of wrongdoing or impropriety in the way the rights were sold and that he would not accept that his “integrity is being doubted”.

According to records, in 2006 Uefa concluded offshore deals through its marketing partner Team with one of the indicted figures at the heart of an alleged “World Cup of fraud” despite previously insisting it had no dealings with any of them.

A spokesman for the investigatory arm of Fifa’s ethics committee said on Wednesday it was unable to comment on whether it would open an investigation.

The emergence of the contracts from 2003 and 2006, which were co-signed by Infantino, link Uefa for the first time to one of the companies involved in the huge unfolding scandal that has brought down the former Fifa president Sepp Blatter.

The Ecuadorian rights to the Champions League, the Uefa Cup and the Super Cup were acquired by an Argentinian company called Cross Trading. It immediately sold on to broadcaster Teleamazonas for about three or four times the amount paid for them. The contracts covered the period from 2003 to 2006 and from 2006 to 2009.

Cross Trading is a subsidiary of a company called Full Play, which is owned by Hugo Jinkis. Last year in an unrelated matter, Jinkis was alleged by US prosecutors to have handed over millions of dollars in bribes and kickbacks to football executives to obtain and retain media and marketing rights. Jinkis, along with his son Mariano, is under house arrest in Argentina.

Jinkis’s involvement in the deals with Uefa from a decade ago are set out in the Panama Papers – a leak of 11m documents from the files of the offshore financial law firm Mossack Fonseca, which were obtained by Süddeutsche Zeitung and shared by the International Consortium of Investigative Journalists with the Guardian and other news organisations.

Collins, who is one of the co-founders of NewFifaNow and a member of the culture, media and sport select committee, called on Fifa’s ethics committee to investigate.

“It is a big embarrassment to Infantino that Uefa previously claimed not to have had any dealings with organisations indicted by the FBI,” Collins said.

Efford added: “Uefa must explain how these rights came to be valued so that it allowed others to cash in by selling them on. This shows just how far Fifa has got to go to convince people that they are capable of clearing out the old corruption.”

Uefa said there was no suggestion of any wrongdoing or impropriety. It said the rights were sold as part of a open and transparent tender process by Team and that the bid from Cross Trading/Teleamazonas was 20% higher than the next best bid.

Uefa said: “Neither Team nor Uefa had any reason to believe that there was anything suspicious or untoward about an agency relationship between Cross Trading and Teleamazonas.”

It said any bilateral deals between Teleamazonas and Cross Trading were “their business, not ours”. “We do know that [IT WAS THE]best offer for these FTA [FREE-TO-AIR]rights in Ecuador. And that’s why we took it.”

Uefa on Tuesday night also attempted to further explain why it had originally said that it had never concluded any deals with any of the individuals named in the US indictments issued in May and December last year, which threw Fifa into an unprecedented crisis and led to the resignation and subsequent suspension of Infantino’s predecessor Blatter.

“At the time of our initial response we had not had the opportunity to check each and every one of our [THOUSANDS]of commercial contracts and so the answer given was initially incomplete,” it said.

“That is the reason why Gianni Infantino initially thought, based on the information provided by Uefa, that there had been no previous Uefa contracts with any companies and/or individuals named in the indictment. That is also why Fifa gave this information to the media.”

But Collins said that the questions raised by the Panama Papers leak and the response to them showed the scale of the task he faced in convincing the world that he represented a fresh start. “We are in the early days of Infantino’s Fifa Presidency but already we are asking whether it can change?”

Separately, on Sunday, the Fifa ethics committee confirmed it had opened an investigation into another story that emerged from the Panama Papers leak.

Files showed that Juan Pedro Damiani, a lawyer who is president of Uruguayan club Penarol and has sat on the ethics committee since 2006, had far more extensive professional links to Eugenio Figueredo, a former Fifa vice president who was among those indicted in the US, than was previously known. Damiani has denied any wrongdoing.

1 Andy Farrell ticking all the boxes in advance of England showdown
2 Ireland wary of Peyper calling the tune as they head for Twickenham
3 Owen Doyle: Day of the jackal may be coming to an end
4 David Brady says he has witnessed the illegal payments of GAA managers
5 Players impressed with Bono’s Irish pride and desire
Real news has value SUBSCRIBE
Crossword Get access to over 6,000 interactive crosswords