Fellaini and Mertens rescue Belgium from the bench 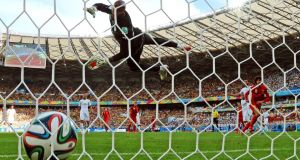 Marouane Fellaini has endured the most miserable of seasons at Old Trafford but he helped break the hearts of a resolute Algeria side here and suggested he might find the summer a bit happier.

The Red Devils, who had not appeared at a World Cup for 12 years but have been called dark horses so often it has gone well beyond cliche, flattered to deceive until Fellaini and fellow substitute Dries Mertens scored goals within 10 minutes of each other to help squeeze past a resolute Algeria side.

One of the smoothest midfields in the competition misfired and spluttered, requiring an old fashioned goal to come to their aid. The scorer was the Fellaini who terrorised defences for Everton rather than the haunted figure of last season.

The “just got out of jail” expression of the coach, Marc Wilmots, as the Belgians overhauled the Fennec Foxes in the last 20 minutes said it all.

First Kevin De Bruyne, who like most of his team-mates had disappointed up until that point, crossed from deep and that distinctive mop sent a header flashing into Rais M’Bolhi’s net just five minutes after Fellaini had replaced Mousa Dembélé.

Belgium, who almost added a third through another Fellaini header at the death, were lucky to escape. Too much choice can sometimes leave you paralysed and Wilmots, who has shuffled the wealth of attacking talent at his disposal during his warm-up matches, appeared to have confused himself by the time this game kicked off. It is a tribute to the strength in depth he has on the bench that he was able to put it right before the end.

At a World Cup that has already proven it will be no respecter of reputations the Algerians, unjustly written off as this group’s likely makeweights but ranked above all their African rivals by Fifa, pushed Belgium all the way.

Some had speculated that Belgium might be porous at the back, despite conceding only four goals in qualifying, but few predicted that they would be quite so toothless going forward.

Despite enjoying plenty of possession the widely fancied Belgians were largely restricted to long-range shots from Nacer Chadli and Axel Witsel, to which M’Bolhi proved himself equal.

On the rare occasions Hazard and De Bruyne managed to get behind the resolute and uncompromising Algeria defence, their crosses failed to find a misfiring Romelu Lukaku, who made way for Divock Origi before Belgium’s first goal.

Wilmots was a study in frustration as he stood hands on hips in the technical area, 12 years to the day since he played in Belgium’s last match in a major tournament, a 2-0 last-16 defeat to Brazil in Japan.

Long before half-time the players were rolling their eyes at one another and remonstrating with arms outstretched. Hazard and Lukaku were among seven Premier League players on show for Belgium.

Mertens, on at half-time for the ineffective Chadli, succeeded in introducing some urgency into proceedings. A fizzing cross from the left was parried by the flapping Algerian goalkeeper but Witsel could not direct his header on target.

One of those Premier League players, Jan Vertonghen, had been to blame for the Algerian goal. The Spurs man, who plays at left back owing to a dearth of specialists in the full back positions, was to blame. Ambling back towards his own goal at half speed, he allowed Sofiane Feghouli, the Valencia player who arrived in Brazil off the back of an impressive season in Spain, to get the wrong side of him.

As the Algeria left back, Faouzi Ghoulam, swung the ball into the penalty area Vertonghen pushed Feghouli to the floor. The midfielder got up to calmly send Thibaut Courtois the wrong way and spark wild celebrations among the noisy contingent of Algerian fans breaking up the sea of Brazilian shirts sported by the locals.

Algeria had not scored a World Cup goal since they drew 1-1 with Northern Ireland in Mexico in 1986, a run that takes in five matches including that dire 0-0 draw with England in Cape Town four years ago. They celebrated accordingly.

And they had looked on course for a famous victory here before Wilmots’s rich array of options on the bench allowed him to shuffle his pack and Mertens disappeared beneath a sea of bodies after scoring the winner. The coach will have plenty more thinking to do before Belgium play Russia.

1 Robbie Henshaw likely to be the only Irish change for France finale
2 Seán O’Brien: Anger over my parents’ break-up never left me
3 Cian Healy: ‘Realistically I got away with murder when I was younger’
4 Bartomeu resigns and drops bombshell of Barcelona joining European Super League
5 Ireland's centre will hold thanks to Henshaw and Aki’s midfield muscle memory
Real news has value SUBSCRIBE
Crossword Get access to over 6,000 interactive crosswords