Raymond Domenech: Irish players should be compensated from €5 million settlement

Speaking from the training base in Malahide, Roy Keane answers questions on FIFA and the FAI. He also looks ahead to the english test and the form of James McCarthy. 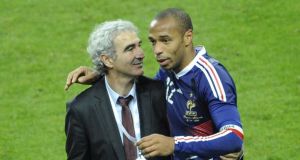 Domenech was France boss when Thierry Henry’s handball helped his side sneak past Ireland in Paris to qualify for the 2010 World Cup in South Africa.

Reacting to Thursday’s confirmation that the FAI received a loan from Fifa to quell the controversy, the 63-year-old said the Irish players who featured that night should be up in arms over the news.

“If I was an Irish player and I had known that, I would have revolted against my directors,” he told Europe 1 on Friday morning.

“It’s not possible that they might have sacrificed the possibility of a solution to go and play a World Cup for $5 million.”

Domenech has not returned to management since France bowed out of the 2010 World Cup at the group stages following an embarrassing training ground boycott by players.

He feels that the Irish players who played in the November 2009 playoff in the French capital should now seek a share of the money that the FAI received in its aftermath.

“I hope now that the Irish players, when they learn this, that they demand some of the money because it was their qualification that was at stake.

“On a sporting level, it’s disgraceful - unacceptable - that you might sacrifice that for money.”

In his autobiography, released after the 2010 World Cup, Domenech suggested that Ireland did not have much cause for complaint after the play-off as they had benefitted from refereeing decisions earlier in qualification.

In March, he revealed that he had dreamed of managing Ireland for years, telling Ma Chaine Sport that he loved the Irish people and their spirit.

Earlier on Friday former Republic of Ireland player and assistant manager Liam Brady said that neither he nor any of the management team or players at the time were aware of any payment.

He was part of then-manager Giovanni Trapattoni’s set-up during that campaign.

“It’s mind-boggling isn’t it? I knew they were under pressure to kind of compensate us somehow after the incident in November 2009, but I didn’t realise that the FAI got as much money as they did,” Brady told RTE Radio.

“I think Fifa are saying it is a loan to do with the Aviva Stadium from what I can gather. John Delaney is telling a different story. I’m sure this story is going to going to go on and on for a little bit longer.”

Roy Keane, Ireland’s current assistant coach and former captain was speaking in Malahide on Friday but was unwilling to discuss the matter.

“I’m not in the mood for all that stuff today. If you want to ask me about the games coming up and the players we have, no problem.

“But I’m not going into the Fifa stuff. I’m here to work with the players and focus on the games coming up. I’m not going there with that one.”

When asked whether Delaney was a distraction coming into the upcoming matches with England and Scotland he quipped; “Isn’t he always.”

1 Eamon O’Shea: We spent quite a bit of time talking about older people rather than to them
2 Love tears them apart in stunning Epsom Oaks romp
3 Aidan O’Brien targets historic eighth Epsom Derby win with strong hand
4 Matt Williams: Six Nations must recognise the desire for revolution outside Europe
5 Sport crosses its fingers yet again as ministerial merry-go-round gets another spin
Real news has value SUBSCRIBE
Crossword Get access to over 6,000 interactive crosswords