Eder no accidental hero for Portugal 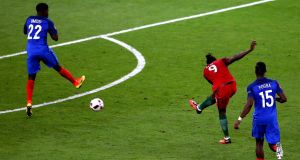 All hail Ederzito Antonio Macedo Lopes, the improbable king of Europe. How fitting that a tournament where the underdog prospered ended with the most unexpected of heroes. A man who spent his formative years in care and was largely derided as a footballer until now scored the winning goal with such poise and power in equal measures it almost made the dour fare that preceded it immediately evaporate from consciousness.

Portugal’s only striker, sprung from the bench for the tiring Renato Sanches late in normal time, not only provided his country with its greatest sporting moment but, by evading France’s Laurent Koscielny and sticking the ball past Hugo Lloris with one swing of his right boot, simultaneously proved a legion of doubters wrong.

It is some turnaround for a player who began 2016 shivering on the bench at the Kassam Stadium, while his Swansea team were being battered by League Two Oxford United in the FA Cup. He left South Wales soon after, joining Lille on loan for the rest of the season with a total of two starts, 11 appearances and zero shots on target in English football.

Eder scored on his full debut in Ligue 1 before injuring a knee but his subsequent form was just about enough to secure a permanent move to the Stade Pierre Mauroy at the end of the season. A so-called flop and journeyman kept plodding on fruitlessly.

Until Sunday night, when everything came good for a team described by their own manager, Fernando Santos, as ugly ducklings. Perhaps the most ugly of all became, according to Santos, a “beautiful swan” with a solitary brilliant moment.

Of the 552 players to participate in France, few could have had a more challenging upbringing than Eder. Born in Guinea-Bissau, his family moved to Lisbon in search of a better life when he was two years old but they could not afford to look after him.

He was sent to Lar O Girassol, a state-run care facility on the outskirts of Coimbra, and remained there until he started playing professional for Academica in 2008. Before that he spent time at semi-professional Tourizense in the Portuguese third tier, a feeder club for Academica based about 40 miles north-east of Coimbra.

He led a regimented life, obeying a strict timetable set by the Catholic priests in charge of the facility, but remained close to his family throughout. Apparently Eder gave his first pay packet of €400 to his mother, his father now lives in London and he has a sister in university in Wolverhampton. Football was his escape - he would play on the streets outside the care home at every possible moment, attempting to emulate his hero, the Brazilian Ronaldo.

“It helped me to grow into the man that I have become and aided my football career,” Eder said last year of his time at Lar O Girassol, which roughly translates to The Sunflower. “Of course, at times it was a little bit tough, which is normal, but I enjoyed it a lot. I met so many of my friends there, and it was good to have that life experience.”

It perhaps makes the centre-half Jose Fonte’s claim amid the celebrations at the Stade de France that his unique double of the Football League Trophy and European Championship was fit for Hollywood seem a tad less appealing to scriptwriters compared to Eder’s stunning plot twist.

In footballing terms, the gangly striker may have become accustomed to being unloved. His international record before Sunday’s final read 28 caps and three goals, all in friendlies. It took 18 appearances for him to find the net for Seleção das Quinas, in a friendly against Italy 13 months ago, and his place in this squad was questioned before and during the tournament.

There was almost an element of tokenism about his inclusion - the only genuine striker in a system where wingers were preferred up front. His impact before the final was six minutes off the bench against Iceland and seven against Austria in a group stage where Portugal benefited from the tournament’s expansion, allowing them to scrape through in third position.

But for a team that have become renowned for lacking a focal point in attack for more than a generation and have siphoned through a number of distinctly average strikers, it is weirdly apposite that the player to finally earn silverware for a nation that always appeared destined to be the bridesmaid would indeed be the latest of ineffective target men.

He has been subject to Cristiano Ronaldo’s thousand yard stare more than most. Yet for his evident deficiencies and regular dry spells, the 28-year-old’s enthusiasm and drive has never wavered. That partially explains the white glove, which was hidden down his left sock, that he put on after scoring. “It makes me feel good, it’s a motivation,” he says of the celebration, which started at Lille and is a nod to the belligerent naysayers that have long said he was not good enough for the biggest stage.

Eder’s moment was a lesson to keep believing in the face of adversity. It will become a tale of inspiration for future generations, his legend will be recalled from Braga to Faro for decades to come and he will immediately join illustrious names such as Figo, Ronaldo and Eusebio in the pantheon of Portuguese footballers. Eder may not have the skills and storied club careers of those greats, but he can say with some certainty he is the only one to have won an international tournament for a nation used to falling just short. - Guardian Service