Didier Deschamps wants France to ‘seize the opportunity’ against Portugal 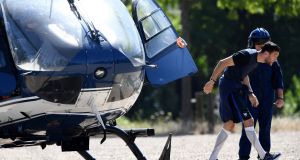 France’s captain and goalkeeper Hugo Lloris ducks down as he leaves a helicopter before a press conference at the Stade de France ahead of the European Championship final against Portugal on Sunday night. Photograph: Franck Fife/AFP/Getty Images

Didier Deschamps believes his players must seize the opportunity to write another chapter in French football history at the Stade de France on Sunday evening but he insists that the game is far from a foregone conclusion and that Portugal, like the hosts, will believe that they can win.

“This is a special moment, a unique opportunity for the players,” said the French coach who himself captained his country to the World Cup and European Championship success during his playing days. “It’s always tough to win trophies in football and winning the silverware with the national team is even tougher because there are only two titles up for grabs and you play against the best players in the world.

“So we need to seize this opportunity although the players are aware that they are privileged just to be playing in this game in front of their own fans in Paris.

“This is a team that has great experience, they are very well organised. They are adaptable according to what they think will work best against particular opponents and they have changed the formation in the past. They keep a back four, they have a very strong triangle in the centre of midfield and they put in a lot of crosses for the front two who they rely heavily upon.

“This is not a side that tries to close the opposition down high up the pitch but they try to break quickly and they have a lot of talent up front. I’m not saying that they only defend but they have defend well and then they get forward very quickly.”

Deschamps is careful to avoid any suggestion that France’s opponents are a one man show but Ronaldo, he acknowledges, is clearly a particular threat that his players need to be prepared for.

“Great players like that, they can win games; they don’t necessarily depend on the others. He is a top player, great athletic attributes. We need to limit his influence but if there is an anti-Ronaldo plan that completely works nobody I don’t think anyone has found it yet.”

Meanwhile, French skipper Hugo Lloris sees Sunday’s final as having the potential to complete this team’s rehabilitation in the eyes of the French people after the disastrous World Cup campaign of 2010 when their first round elimination was overshadowed by a farcical player rebellion against then coach Raymond Domenech.

“Clearly we went through a crisis in French football,” said the Tottenham goalkeeper, “but we have been able to come through that and step by step we have put it behind us.

“Coming from that to putting together a great team takes time and a lot of hard work. If you look at the Spanish or the Germans, you can’t have success over night, you can’t buy experience but now we have the opportunity to deliver on all of the work that we have done and we need to make the most of that. What’s most important now is that we come away without regrets about the match.”

The French have evolved to a considerable extent, not just in the two years since they went out of the World Cup rather tamely to Germany, but also over the course of this tournament and after beating their neighbours in Marseille on Thursday night, they go into this final with a great of confidence.

“I think we’ve grown throughout the competition,” said Lloris. “When you look at the difference between our opening game and our most recent one then you can see the progress that we’ve made. But there are no favourites at this stage of the tournament, just two teams who know they are one match away from the title. We believe in ourselves and we have worked very hard to reach this stage of the competition but we know we will have to outdo ourselves to win the title.”

The threat the Portuguese posse from set pieces is, he says, something that the hosts will have to be especially alert to.

“When you play against players like that (Ronaldo) who have to physical attributes required to hang in the air you have to get up there early so they don’t get the run on you. But they have other players who are dangerous in this area too and players who are very good at taking set pieces so it is going to be an important part of the game. We are going to have to be determined, concentrated and aggressive in this area.”

The nation, he knows, is willing them to win. “We have had some tough times with the tragic events that have occurred off the pitch and the French people wanted an escape from all of that through this competition. Sport has the strength to bring people together; you can see that at the moment but we still have one game left in order to complete the journey.

“The story has been great so far but it would be so much greater if we could go and win this match.”

1 Ireland v Scotland: Doris’ day as Caelan set for first cap
2 Six Nations: Pundits, journalists and players have their say
3 Gary Lineker: ‘60 is just a number, 70 is the one to worry about’
4 Ashleigh Barty now living up to all her earlier promise
5 John McEnroe slams Margaret Court as ‘crazy aunt’ of tennis
Real news has value SUBSCRIBE
Crossword Get access to over 6,000 interactive crosswords