Deschamps ‘a water carrier’ who can stir France’s footballing soul

The former French midfielder and captain is a clever, driven man and a French good-luck charm 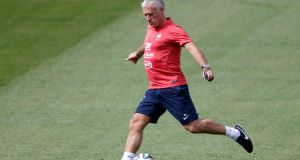 For a man once belittled by Eric Cantona as “a water carrier,” Didier Deschamps has certainly made a habit of carrying lots of trophies. French reporters like to ask Deschamps, now the French national team manager, if he was born under a “bonne etoile,” a lucky star.

But there is clearly much more than good karma and good timing involved at this stage of the game. He was captain of the French team that won the 1998 World Cup and the 2000 European Championship and a key player for Marseille and then Juventus when each club won the Champions League.

In his first job as a manager, he took Monaco to the Champions League final, and in his first season at Olympique Marseille, he guided the club to its first French league title in 18 years.

He has had his share of setbacks, both professional and personal, including the death of his older brother in a plane crash when Deschamps was a teenager. He has had his character-building journeys through the soccer desert.

But no Frenchman in the sport that France likes best has ever had his kind of consistent success. “I’ve always hated to lose and I continue to hate it,” Deschamps, 45, said this week.

“But I’ve been obliged to accept it because I also have had some crushing defeats. I do everything I can to win but ultimately it comes down to very little. My players need to have the feeling that they’ve pushed themselves to their limits.”

They already may have gone as far as they can in Brazil. Germany, more experienced and more impressive in recent tournaments, will be the favorite against Deschamps’ French team in the quarterfinals in Rio’s Maracana stadium.

But there have been some visible cracks in the German facade, and Les Bleus are unquestionably in a better place than they were before Deschamps took charge in 2012 or when they were faltering last autumn. They are also now staying true to their bust-and-boom pattern in World Cups.

They failed to qualify, devastatingly, in 1994, losing on a last-gasp Bulgarian goal. They then won it all at home in 1998, beating Brazil by 3-0 in the final in the Stade de France with Deschamps, as captain, holding the Cup aloft first.

In 2002, with an all-star cast that included Zinedine Zidane and Thierry Henry, the French were upset by Senegal in their opening match and failed to get past the first round.

Then in 2006, they roared back to the final, losing to Italy in a match better remembered for Zidane’s expulsion after his head butt of Marco Materazzi than for the penalty kicks that decided it.

In 2010, the French duly struck bottom again with a player revolt against manager Raymond Domenech, the same cryptic man who had taken them to the 2006 final, and another first-round exit.

After losing in Ukraine, 2-0, in November in the first leg of their World Cup qualifying playoff, the French were all but eliminated. But they came together to win by 3-0 at home in the same stadium where France had won the World Cup, tossing Deschamps into the air in celebration.

“What I experienced as a player in 1998 is above everything in terms of emotion,” Deschamps said. “But I’ve never had a feeling like that as a coach.” By earlier agreement, qualifying for the World Cup also meant that Deschamps signed a contract extension to coach France until 2016, when it will be the host nation for the European Championship.

That gave Deschamps the kind of job security and long-range authority that Domenech sorely lacked in 2010 when it already was clear that he was on his way out after the World Cup in South Africa.

In retrospect, the French implosion in 2010 was as much an administrative failure as it was a tactical or attitudinal failure. But Deschamps, who took over for another 1998 World Cup alumnus, Laurent Blanc, also has natural authority: both because of his record and because of his strong, communicative personality.

“I never refer to what I was or what I went through; they know it already,” Deschamps said of his players in a recent interview with L’?quipe. “They have the possibility to create their own story and to transform their own existence. But I kept telling them before the last Ukraine match: ‘To be in Brazil or not to be in Brazil is not at all the same thing.’”

Deschamps, with his lilting southern French accent, spoke from experience, having missed out on the 1990 and 1994 World Cups. He was no scorer; no creator. He was a hard-running, quick-thinking defensive midfielder. Cantona, who was a scorer and creator, called him a “water carrier” because he was the supply line to the stars, and there was truth in it.

“People thought it was out of order or a bit strong, but when you look at the way Didier played, he was,” said Chris Waddle, an Englishman who played with Deschamps at Marseille. “He knew what he was good at and what he wasn’t good at, and you need this type of player in your team. And what he’s done with France is he’s got players doing what they’re good at, and he’s not asking them to do what they’re not good at.”

“I didn’t have the pretension to think that I could change a match by myself. Players like me, we did something of a thankless job. You don’t show a hard tackle or stripping someone of possession in slow motion on the big screen.

“But if you add it all up, I was always the one that the coaches wrote down automatically on the lineup card.”

One of his mentors, Aime Jacquet, the coach of the 1998 French team, used to call Deschamps, who is 5 feet 8 1/2 inches , “Trois Pommes” after the quaint French expression for someone short: “As tall as three apples.”

“But,” Jacquet used to warn, “you’ll never take a bite out of him.” So it has gone in the World Cup, where Deschamps, as a player and a manager, is a combined 11-0.

Like Jacquet in 1998, who decided not to select Cantona and David Ginola, Deschamps left the talented but divisive midfielder Samir Nasri off the team in the collective interest.

“Whatever people say about the French, they’ve always had the talent, and if you can get the mentality right and get them together as a unit and get the team spirit, it’s been proven that you’ve got a chance of doing well,” Waddle said.

“Nasri is not a Lionel Messi. He’s not a Neymar or Ronaldo, but he’s a talented footballer. And what Didier has done is looked at it and thought, I don’t want these little cliques in the changing room. I’ll clear that out and get that right, because I know this team has ability.”

Deschamps also has compensated adroitly, at least so far, for the loss of star winger Franck Ribery to a back injury. Deschamps, with new talent like Paul Pogba and Blaise Matuidi, has the French playing expanded, box-to-box roles in midfield and has French forwards like Karim Benzema playing more fluid roles up front.

He also has created both productive internal competition at multiple positions and a palpable esprit de corps with a young team, the vast majority of which is playing in its first World Cup.

It still may not be enough tomorrow. The Germans, for all their surprising struggles against Algeria in the second round, are a powerful, versatile side. But Deschamps is a clever, driven man and, for good reason, a French good-luck charm.