‘Cristiano Ronaldo told me I would be scoring the winning goal’ 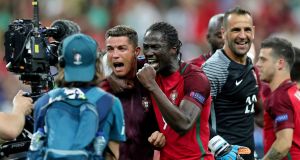 Eder barely made an imprint during his ill-fated spell at Swansea, but the striker has left an indelible mark on Portuguese football after scoring the goal that clinched Euro 2016.

This time last year the 28-year-old arrived at the Liberty Stadium from Braga, only to exit seven months later having mustered just two Premier League starts.

It was announced in May that Eder’s loan move to Lille was being made permanent and he returns to the Ligue 1 club having broken the locals’ hearts.

A second-half substitute at the Stade de France, the striker shook off Laurent Koscielny’s attention to drive home a fine winner in the 109th minute on Sunday.

“It was an amazing moment,” Eder said. “Our team worked really hard.

“We knew that the Portuguese people were behind us. We fought with immense strength, we were amazing.

“I think we deserve this title due to the work we put in, all the players and the staff.

“Portugal had been wanting this title for so long. This is fantastic and well deserved. Congratulations to every single one of us.”

It was just Eder’s third appearance of the tournament — all of which have been off the bench late in the second half.

Despite that and his struggles at Swansea, there remained an inherent self-belief that such a moment would arise.

“Since the first day (I thought my opportunity would come),” he said. “Ever since Fernando Santos called me up.

“He knows what my capabilities are and so does our group. They trust me and I have worked hard to contribute and today it was possible. I’m very happy about what we’ve achieved.”

Eder reflected fondly on his “very special goal”, but was quick to thank his team-mates for their efforts in creating it.

The striker was also quick to praise a player that had long since left the pitch, with the injured Cristiano Ronaldo going from talisman to motivator.

“Cristiano told me I would be scoring the winning goal,” Eder said. “He and all my team-mates.

“He gave me strength and positive energy. And that goal was really important.

“A lot of hard work went into it. We worked hard from the first minute and right from the beginning of the Euros. We were spectacular. The Portuguese people deserve this.”

Having been part of the Portugal side that were stunned in the final as hosts by Greece in 2004, Ronaldo celebrated wildly with his team mates as ticker tape rained down from the rafters.

“This is one of the happiest moments in my career,” he said. “I’ve always said I wanted to win a trophy with the national team and make history. And I did it. Thank God, things went well for us.”

Coach Fernando Santos, whose side had won only one match inside 90 minutes out of seven at the tournament, hailed a perfectly executed tactical display. “We were as simple as doves and as wise as serpents,” he said. “Wherever we’ve gone there have always been Portuguese fans. This lifted our souls. It’s hard to describe the players’ emotions - it’s incredible.”