Speaking from the training base in Malahide, Roy Keane answers questions on FIFA and the FAI. He also looks ahead to the english test and the form of James McCarthy. 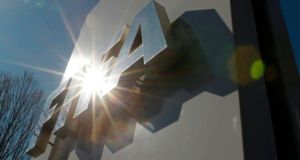 The payment from Fifa followed the Republic of Ireland’s extra-time play-off defeat to France in Paris when Thierry Henry intentionally handled the ball in the build-up to the game’s decisive goal. Photograph: Getty Images

The Football Association of Ireland has confirmed it received €5 million from Fifa in the wake of Ireland’s controversial failure to qualify for the 2010 World Cup in South Africa. There is no specific record in the FAI’s accounts of the money given by world soccer’s governing body.

The payment from Fifa followed the Republic of Ireland’s extra-time play-off defeat to France in Paris when Thierry Henry intentionally handled the ball in the build-up to the game’s decisive goal.

A media frenzy in the game’s aftermath included calls for the game to be replayed. Sepp Blatter, the then Fifa president who resigned from the position on Tuesday, poked fun at such claims and publicly stated Ireland had sought to be included in the World Cup as a 33rd country.

FAI chief executive John Delaney said on Thursday that these events led to the Fifa payment. “I’ll tell you exactly what happened . . . We felt we had a legal case against Fifa because of how the World Cup hadn’t worked out for us because of the Henry handball. Also the way Blatter behaved if you remember on stage, having a snigger, having a laugh at us.

Fifa also link the money to the defeat by France but, in a statement issued on Thursday night, it described the money as a loan, made to help with the construction costs of the Aviva stadium. Fifa also said the sum was written off when Ireland failed to qualify for the 2014 World Cup in Brazil.

Jim Boyce, a Northern Irish member of the Fifa executive, said he believed such “arbitrary payments” should be investigated.

In a statement last night, the FAI insisted the €5 million payment “is fully reflected in our financial statements which are audited independently”.

1 CVC cuts Six Nations offer by half to €165m as talks continue on new deal
2 Jack Charlton era made GAA sit up and realise its greatest strength
3 Game Changers: Living beyond fear puts Alex Honnold above all others
4 Alain Rolland to step down from World Rugby position
5 Gerry Thornley: Munster will make for interesting case study when rugby resumes
Real news has value SUBSCRIBE
Crossword Get access to over 6,000 interactive crosswords