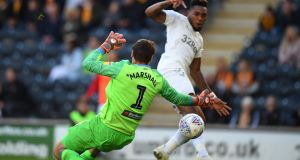 West Brom took over at the top of the Championship after claiming a 3-2 win at struggling Preston.

The Baggies took advantage of Leeds’ 1-1 draw at Sheffield Wednesday on Friday evening and Middlesbrough’s stalemate at Hull to move to the summit.

Jay Rodriguez opened the scoring for the visitors early in the second half, slotting home from eight yards, but Preston levelled through Andrew Hughes’s drilled free-kick.

Their joy was short-lived, however, as Ben Davies turned the ball past his own goalkeeper to put West Brom back in front after 73 minutes.

Dwight Gayle’s curling 25-yard free-kick made it 3-1, with Republic of Ireland midfielder Alan Browne netting a consolation for Preston deep into stoppage time.

Middlesbrough are third after they failed to build on Britt Asombalonga’s fourth goal of the season against Hull.

Sheffield United came from behind to beat Millwall 3-2 at The Den.

Billy Sharp saw a penalty saved by Lions goalkeeper Ben Amos after Shaun Williams was adjudged to have handled.

Sharp made amends before the break when he glanced in a pinpoint cross from Kieron Freeman, but Jake Cooper equalised with a thumping header at the start of the second half.

Derby were brought back down to earth following their Carabao Cup success at Manchester United in midweek as Craig Noone’s early header was enough to earn Bolton a 1-0 win.

Brentford moved into the playoff places with a 2-2 draw at home to Reading.

Reading took the lead when the Brentford defence failed to deal with a free-kick into the area and John Swift pounced on the loose ball.

Benrahma was sent off for a second bookable offence with four minutes remaining but the 10 men were not to be denied and Yoann Barbet headed in a last-gasp leveller.

Lewis Grabban missed one penalty but scored another to earn Nottingham Forest a point in a 2-2 draw at Blackburn.

Grabban had already missed a spot-kick when he swept in Joao Carvalho’s knockdown, but Adam Armstrong’s cross-shot brought Blackburn level with 25 minutes remaining.

Bradley Dack’s seventh goal in all competitions put Blackburn 2-1 up, only for Grabban to make amends from the spot 10 minutes from time.

A late penalty from Mario Vrancic snatched Norwich a 1-0 victory against Wigan, while goals from Courtney Baker-Richardson, Connor Roberts and Jay Fulton eased Swansea to a 3-0 win against QPR.

Ipswich threw away a 2-0 lead at Birmingham to leave manager Paul Hurst still searching for a first win.

Jon Nolan lashed the opener into the roof of the net and Matthew Pennington added a second from Grant Ward’s corner before half-time.

Lukas Jutkiewicz pulled a goal back for Birmingham early in the second half and the forward hauled Blues level after a melee in the box after 68 minutes.

Pennington was sent off at the death for a second yellow card and Che Adams missed a golden chance to win it for Birmingham.