Van Gaal will need time despite United’s successful US tour 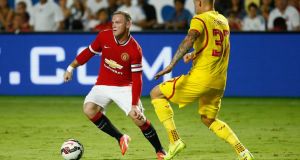 Nobody ever said this was going to be easy. Even before Louis van Gaal’s appointment at Manchester United the general prognosis was one of grizzled and wary optimism, a certainty that success on the pitch would come only after a process of necessary abrasion, of scorched earth, toxins purged, machines recalibrated and all the rest of it. Van Gaal himself wasted no time in pleading for patience, just as those who know him well have pointed out the “process trainer” always takes time to rip out and re-lay, to shape the playing side of a club to his theatrical will.

All of which is perhaps a little hard to square with the sense of slightly giddy optimism created by United’s successful US tour. Indeed such is football’s capacity for optimism that after five victories, 16 goals scored and a pair of eye-catching wins against Liverpool and Real Madrid, United are as short as 5/1 with some bookmakers to win the Premier League title.

The club’s more impressionable support is nurturing a brittle sense of new-era momentum, while those expecting tales of showdowns and face-offs and players marched out of the lunch hall by the earlobe have been disappointed.

Instead the dominant images from the tour are of a highly motivated group of players and a manager almost childishly energised, plunging his great pudgy hands into the cake-mix of this post-Moyes squad and flinging together something tasty-looking, albeit in the lukewarm temperatures of the International Champions Cup.

“It is better to win the preparation games than to lose,” Van Gaal conceded grudgingly after the 3-1 defeat of Liverpool in Miami and it seems unlikely United’s manager will have been overly swayed either way by what he has seen in the US.

The obvious lessons seemed unremarkable: Phil Jones needs to stop diving into tackles; Ander Herrera is a tenacious midfielder; Wayne Rooney can finish; and pre-season games are, above all, about fitness and familiarity.

For all that, United’s early sprightliness seems significant, if only because it jars so strikingly with received opinion about Van Gaal’s methods. A little early friction with the dominant culture has always been part of the Van Gaal narrative and, indeed, part of the fascination of Louis-meets-United. At Ajax Van Gaal took three years to win the league (and four to win the Champions League with one of the great academy-built teams) before moving on abruptly to Barcelona.

In Spain he won La Liga in his first season but it is a period remembered as much for his struggles implementing his methods, while his second spell at Camp Nou never got started at all: Van Gaal was sacked with the club three points above the relegation places. Seven years later his first season at Bayern Munich was marked by only five wins in his first 10 games: it ended with a league title, a Champions League final and Van Gaal enthroned as Germany’s manager of the year.

It is easy to overstate this quality of patient design. All managers are “process managers” to a degree, even if that process involves little more than a series of panic-stricken raids on the transfer market and spending half an hour every morning telling your centre-forward he is the best in the world. There are great variations within this and for the more obviously systems-based managers success has often followed a period of gear-shift and bedding in.

With Van Gaal the need for patience is twofold. For one thing – and notoriously – there is the sheer academic density of his tactical blueprint. Van Gaal breaks a football match down into four phases, from non-possession, to pre-possession, to actual possession, all the way back to no possession.

Still, it is almost hard to imagine Van Gaal can avoid a period of retrenchment somewhere along the way, not least in a league whose most notable strength is its relentlessness, the absence of space to draw breath. United have a deceptively hospitable start but games at Sunderland, Burnley, Leicester City and West Bromwich Albion look deceptively challenging for a team in transition.

One of the more encouraging parts of the summer tour was the sight at the end of a distinctly sheepish looking Darren Fletcher and Rooney holding up the International Trophy as though presenting to the cameras a dead fish washed up on the high-tide line. Van Gaal will be encouraged by the energy of his squad, a pleasing response to his own obvious willingness to take on the task. But this is a process that has yet to begin in earnest. Guardian Service