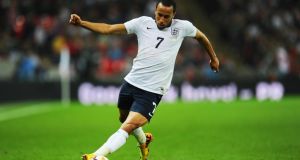 The 22-year-old has come to prominence both on and off the field recently and his fine start to the Premier League season saw him called up by Roy Hodgson for their two vital World Cup qualifiers.

Townsend scored on his full international debut against Montenegro last Friday before winning a second cap against Poland on Tuesday as England qualified for the World Cup finals in Brazil next year.

Tottenham stated on their website: “We are delighted to announce that Andros Townsend has signed a new four-year contract with the club.”

Townsend has made eight Premier League appearances this season for Spurs after picking up valuable top-flight experience at QPR in the second half of the last campaign.

Prior to the 2013/14 season, Townsend had made 18 appearances for the White Hart Lane club, scoring three goals.

While his on-field contribution has seen him take centre stage, Townsend has also found himself caught up in the row over Hodgson’s half-time joke during the match against Poland.

Hodgson made a quip about a monkey in space to illustrate why his players should give the ball to Townsend but was forced to apologise on Thursday after claims it was racist.

Townsend, whose father Troy is the mentoring manager for anti-racism group Kick It Out, wrote on Twitter: “I don’t know what all this fuss is about. No offence was meant and none was taken! It’s not even news worthy!”

It did, though, overshadow England’s qualification and continues to rumble on with the Football Association expressing its full support for Hodgson.

Troy Townsend admitted there had been a spectrum of emotions, telling Sky Sports News: “The goal on Friday night gave us an amazing feeling and I thought he was absolutely fantastic in the hotbed of Tuesday.

“It’s hard to put into words how we felt at the time and we’re immensely proud of him.

“The nation were quite rightly proud of their side, two important games, we reached our goal of the World Cup but unfortunately there was no time to enjoy that feeling...before the very next day we are talking about something a little bit different.

“There’s disappointment. It’s a nightmare. It’s been difficult for us at Kick if Out. I’m not sure people fully understand our role. We have an obligation to report incidents that happen and we’ve done that regardless of whether it’s international or grass-roots level.

“It’s particularly difficult for me having involvement on both sides. We should be concentrating on the glories of both games.”

Spurs manager Andre Villas-Boas has no doubt Townsend will be able to shoulder the pressure of being England’s next big thing.

The player’s place in the Tottenham squad was in doubt at the start of the season but now he is seen as England’s brightest emerging star.

Jack Wilshere was afforded that tag after he burst on to the scene with Arsenal a couple of years ago while players like David Bentley have crashed and burned under the weight of expectation.

Villas-Boas knows Townsend’s every move will be scrutinised over the next seven months in the build-up to the World Cup, but he is sure the player will be able to cope.

“That is part of growing up as a player,” the Tottenham manager said. “I would suppose that wouldn’t divert his attention too much.

“I expect him to be the same player. There are going to be more people worried about him, he will be more in the public eye and they will demand performances from him and I expect him to respond.

“Most of his colleagues are down to earth, he is in the right environment for his development and I think we have to help him in that sense.”

Townsend had to go through nine loan spells before he got his first crack at regular first-team football with Spurs this season.

And the main reason the 22-year-old has had an extended run in the first team is because of an injury to Aaron Lennon, who is now fit and in contention for Sunday’s game at Aston Villa.

Villas-Boas was concerned that Townsend’s experience with the international team would be counter-productive.

The Portuguese feared the winger would go down the same route as Jake Livermore and Tom Huddlestone, who received call-ups and were then quickly discarded.

Theo Walcott and Alex Oxlade-Chamberlain will come back into the reckoning by the time the World Cup comes around, but Villas-Boas is sure Townsend will feature for England for a long time to come as long as he keeps impressing for his club.

He added: “We’re very proud of what he has done, (we have) seen him play with so much confidence and determination he’s really set his place in the team, for Tottenham and for his country.

“It’s performances like this that keep your place in the team. Whenever he’s been called up by myself or Roy he’s given great performances.

“At the moment we’re very happy with what he’s been doing and I think Roy thinks the same.

”It’s wonderful for him. He’s come along with the explosion he had in the Premier League, not just with Tottenham but with his country.

”He is doing extremely well for club and country and deserves credit.”