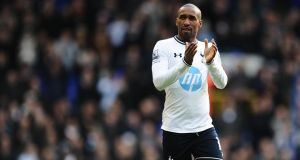 Sunderland have completed the signing of Jermain Defoe from Toronto FC with Jozy Altidore heading in the opposite direction.

The Black Cats have confirmed the 32-year-old former Tottenham forward has signed a three-and-a-half-year deal after completing a swap with United States international Altidore.

The move sees Defoe return to the Premier League after seeing out just 11 months of a four-year contract with MLS side Toronto. He could go straight into the squad for Saturday’s trip to Spurs with head coach and former team-mate Gus Poyet is delighted to have secured the kind of firepower his side has been so sadly lacking to date this season.

Sunderland have scored just 18 goals in 21 league fixtures with €8.65 million signing Altidore having contributed none of them, and Poyet will hope a man who managed 11 goals in 16 appearances for the Canadian side will help to address that failing.

He said: “I am thrilled that Jermain is a Sunderland player. I know all about his attributes and his qualities first-hand and his exceptional goalscoring record speaks for itself. He has something different, something special.

“We know each other very well - he was very young when we played together and I was coming to the end of my career, so I know him from inside the pitch. When I returned to Spurs as a coach, it was a great experience for me to work with him, so I am really looking forward to having him as my player now and for him to be part of our team.

“I would also like to thank Jozy as his begins his career at his new club. It is a fresh start for him and we wish him well.”

The Black Cats managed to beat off competition from a series of Premier League rivals, including Crystal Palace and QPR, to acquire Defoe’s services, and sporting director Lee Congerton was thrilled to see his hard work finally come to fruition.

Congerton said: “Jermain is a player who has proven his quality in the Premier League. Naturally, with a player of his calibre, there was a lot of interest in him, not only in England but across Europe, so we are delighted that he has chosen to come to Sunderland.”

Altidore, who joined the club from AZ Alkmaar during the summer of 2013, managed just three goals in 52 appearances in all competitions, and only one in 42 in the league.