Liverpool midfielder was the most captivating presence of his era 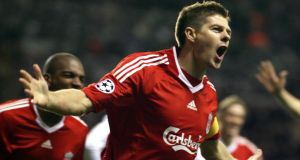 Gerrard is also only ever going to find himself suffering a crick in the neck gazing up at the Olympian pedigree of those who had the good fortune to play in the glory years. Photograph: Peter Byrne/PA Wire.

Farewell then, Steven Gerrard. It has been emotional – not to mention glorious, thrilling and, by the end of a 16-year Liverpool career of operatic highs and lows, a little blurred and strangely hard to classify. The temptation is to reach for the big soaring notes – and with good reason. Nostalgia is an easy chord to twang but, with Gerrard set to leave at the end of the season, it does seem a bit as if a golden thread connecting Liverpool to their glorious past is about to be decisively severed.

Gerrard’s departure leaves Liverpool short of one slightly ponderous 34-year-old central midfielder. But it also plucks out the final on-field stitch connecting the club to this wonderfully lush brocade, a past that, with Gerrard gone, will become just a little more remote. Small wonder, then, that the temptation has been towards hyperbole and the slightly meaningless suggestion that Gerrard ought to be remembered as Liverpool’s greatest ever player.

Is Gerrard demonstrably a better player than Kevin Keegan, who over six years was the headline player in three league titles, two Uefa Cups and the 1977 European Cup triumph? Has there ever been a better British central midfielder than Graeme Souness, who played 359 matches, scored 55 goals and drove his team on to five league titles and three European Cups. Souness also scored spectacular goals. He was also inspirational. His levels rarely dipped.

Kenny Dalglish was the best player in Britain for several years: has Gerrard ever been this? The point is that not only are comparisons impossible between different eras and different functions within very different teams but Gerrard is also only ever going to find himself suffering a crick in the neck gazing up at the Olympian pedigree of those who had the good fortune to play in the glory years.

Beyond this there is also no single, fixed notion of Gerrard himself. This is a player who emerged as a coltish, buzz-cut local lad and who subsequently filled the roles of hugely promising tyro, midfield wild thing, world-class right-sided player, playmaker, midfield shield, club legend and all round heritage piece.

But his time has been unavoidably tied to a period of decisive decline. When Gerrard made his debut, eight years after Liverpool’s last league title, there was still a whisper of empire around the place.

When he finally goes those eight years will be a quarter of a century, with Gerrard the lone constant, a player whose gifts, connection to the club and moments of high-grade inspiration have been the consolation prize.

There is a case that being Liverpool’s most prized player has also not been good for him. The most striking part of Gerrard’s goal in Istanbul 10 years ago is the sight of him waving his arms about immediately afterwards, lost entirely in the struggle. This was exactly the right moment to be like that; other times, perhaps not so much. But this has so often seemed to be what was required.

There is nothing much to be gained from describing him as the best Premier League player of his time. Among midfielders Roy Keane, Patrick Vieira, Frank Lampard, Paul Scholes, Ryan Giggs, Cristiano Ronaldo and one or two others all have a competing claim on a share of that prize.

But Gerrard is still perhaps the most captivating on-field presence of his era. So much so, it is just as useful to speculate on what he might have become in a parallel world where Liverpool had a team to match his talents.

It is equally tempting to imagine what might have happened had Gerrard spread his wings and moved on as he might have in 2005. One can only speculate as to what Gerrard might have become had the urgency, the fear, the pressure to resuscitate and preserve been removed from his game.

All that really seems certain now is that he was a player of great, sustained moments of influence and one who will also be greatly missed for all sorts of reasons. Guardian Service