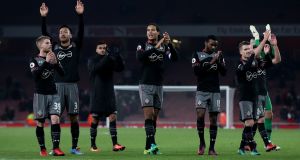 Southampton have stumbled too often at this hurdle in the recent past but, for the first time in three decades, they have a League Cup semi-final to savour in the new year.

In inflicting Arsenal’s first defeat since the opening weekend of the season, curtailing a 19-match unbeaten run in the process, the visitors claimed a notable scalp here en route to the competition’s last four. Theirs was a mature and, in truth, dominant performance played out as the vociferous away support bellowed regular reminders that a trip to Wembley is edging closer.

Few visiting teams will prevail as comfortably as this at the Emirates and it was Arsenal, with Emiliano Martinez blocking sharply from Pierre-Emile Hojbjerg, who might have been breached yet again in the latter stages. The hosts would normally have expected to be laying siege to the opposition goal by that point, but Southampton kept them at arm’s length virtually all night. Arsene Wenger, fidgeting uncomfortably on the touchline, had given up long before the end with his revamped lineup - there were 10 changes from Sunday - ineffective throughout. One route to silverware has been blocked.

This had always seemed likely to prove a stern test of the home side’s resolve, with Wenger never inclined to alter his policy of granting fringe and youth players their opportunity in this competition. His youthful selection had been beaten here by these opponents, then under the stewardship of Ronald Koeman, two years ago. Claude Puel’s side, with eight changes of their own but an air of experience retained, duly stamped their authority all over this tie before the interval, the more streetwise and authoritative of the teams having quickly established their dominance.

They did not run riot in that opening period but they still scored twice to leave the locals grumbling at the apparent waste of it all. Arsenal retired with the boos pursuing them down the tunnel.

There was a swagger to much of Southampton’s play in the early forays. Sofiane Boufal, on only his third start for the club since his record £21m arrival from Lille in the summer, typified their confidence as he glided with menace at unnerved opponents, the Moroccan tormenting back-tracking Arsenal players whenever the visitors countered.

It was his first-time shot from Ryan Bertrand’s cut-back 13 minutes in which Rob Holding blocked, only for the ball to run free to Jordy Clasie just inside the area. The Dutch international instinctively belted it into the corner with glee to register a first goal for the club.

The reward had been sparked by Maya Yoshida’s glorious cross-field pass from deep for Bertrand to collect that, in its relative simplicity, exposed Arsenal’s fragility across an unfamiliar back-line. The hosts huffed and puffed in arrears for a while without ever really threatening to force parity, before Harrison Reed’s snapping at Aaron Ramsey stole back possession seven minutes from the break.

There was a touch from Bertrand before Steven Davis, as busily impressive as ever, supplied Boufal on the left and, after briefly teasing Gabriel, he liberated Bertrand on the edge of the box. The England full-back gathered with his first touch and spat away a shot with his second before Holding could choke the effort, the attempt scuttling into the corner beyond a sprawling Martinez.

They merited that advantage. Both Boufal, whose shot flicked off Holding and past a post, and Sam McQueen might have added to the visitors’ tally with Arsenal’s rhythm so disjointed. Wenger flung on Alex Oxlade-Chamberlain to add a bit more nous to the ranks, with Granit Zhaka patrolling midfield for the injured Mohamed Elneny, but a pair of efforts from Francis Coquelin - neither of which overly troubled Fraser Forster - represented the extent of the threat approaching the final quarter. The hosts, befuddled against disciplined opposition, appeared to be running aground.

They were hampered by Lucas Perez’s rustiness after an absence of over a month with a knee injury, the Spaniard dropping ever deeper in search of the ball but eclipsed too easily by the imposing Virgil van Dijk and Yoshida when leading the line. Oxlade-Chamberlain spurned their best opening, blazing over the bar from Xhaka’s clever touch, but the better chances were still Southampton’s on the break.

Davis lobbed on to the roof of the net when well placed before Shane Long muscled himself away from Gabriel and, free in front of goal, steered his shot wide of the far post.

The striker cursed the miss but it hardly mattered. The stronger selection won this tie. For Southampton a rare semi-final appearance deservedly awaits.

All in the Game: Capello plumps for Calamity James over Joe Hart 10:20
The Offload: Roll up for rugby’s very own horror film 09:00
Ken Early on Mick McCarthy II; racing will endure even the harshest criticisms 07:19
Virtual Grand National raises €3m for NHS and Irish Red Cross 06:52
Ken Early: Mick McCarthy II was no blockbuster, more of a flop 07:00