Romelo Lukaku sparks a fifth win in six for Everton 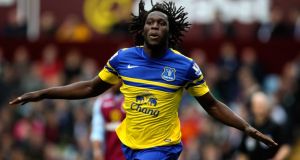 Romelu Lukaku of Everton celebrates after scoring the opening goal of the game against Aston Villa at Villa Park. Photograph: Ben Hoskins/Getty Images

Premier League round-up: Romelu Lukaku won the battle of the Belgians at Villa Park as Everton kept up their fine start to the Premier League season with a 2-0 victory over Aston Villa.

Lukaku’s head-to-head with compatriot Christian Benteke, back in the Aston Villa XI after hip trouble, looked like being the decisive battle and it was the on-loan Chelsea striker who scored the Toffees’ opener.

But substitute Leon Osman made an equally vital contribution, providing the pass for Lukaku’s 68th-minute effort and then slotting home a neat finish of his own with nine minutes remaining.

It might have been different had Benteke converted a seventh-minute penalty for Villa, but Tim Howard produced a sensational one-handed save.

It was the first of several important stops by the American in a first half that somehow ended goalless despite a raft of fine chances at both ends.

The result means Everton now have five wins from their last six, while Villa’s home form is starting to become a real concern.

Southampton’s rise continued with a comprehensive 2-0 defeat of Fulham making this their best ever start to a top-flight season.

Despite a summer of big-money signings, talk on the south coast of a European challenge was laughed off by most right-minded people.

However, Saints are dumbfounding such naysayers, with Saturday evening’s victory propelling them to third in the Premier League and making this a better start than they managed when finishing runners-up in 1983/84.

They will do well to match that this term, although a European push certainly looks possible after their latest impressive performance.

Mauricio Pochettino’s side dominated from the outset at St Mary’s, with Fulham failing to muster a single shot in a first half in which headers from Rickie Lambert and Jay Rodriguez put the hosts deservedly ahead.

Only Maarten Stekelenburg’s fine form, the goal frame and bad luck prevented Saints racking up an even greater margin of victory, as they secured a sixth clean sheet of the campaign, a far cry from the 26 goals they had conceded at the same stage of last season.

Marshall was at the centre of Chelsea’s controversial equaliser in the loss at Stamford Bridge last weekend when dispossessed by Samuel Eto’o and he starred in Norfolk.

Norwich were dominant but found Marshall in fine form to leave the Canaries in a precarious position with only Crystal Palace and Sunderland beneath them in the table.

Scotland stopper Marshall was not the only goalkeeper on his game as John Ruddy denied Jordon Mutch at point-blank range.

The Canaries might also have had a penalty, but again luck was against them.

A Gary Hooper shot hit Steven Caulker on the arm after bouncing off the Cardiff captain’s boot early in the second half, but referee Mike Jones waved appeals away.

Hooper had numerous opportunities to open his Premier League account, but failed to do so and Hughton’s decision to substitute the former Celtic striker 18 minutes from time was met with cries of “you don’t know what you’re doing”.

Norwich did beat Marshall late on, but it sparked a melee as Leroy Fer was expected to return the ball to the goalkeeper. Jones ruled in Cardiff’s favour as the match finished in a stalemate.