Remi Garde hints at a summer exit after transfer let-downs 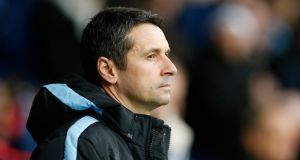 Aston Villa manager Remi Garde has indicated he may reassess his position in the summer after failing to land any of his transfer targets. Photo: Andrew Boyers/Reuters

Aston Villa manager Remi Garde has indicated he may reassess his position in the summer after failing to land any of his transfer targets.

The Frenchman has missed out on all of the players he wanted to aid Villa’s survival bid in the Premier League.

Garde wanted Seydou Doumbia, who instead joined Newcastle on loan from Roma, while Wahbi Khazri signed for Sunderland, and a deal for Hajduk Split goalkeeper Lovre Kalinic collapsed after a work permit appeal was rejected.

He has also hinted Villa’s transfer and financial plans may have changed since he became manager in November, with the club now 10 points from safety.

“Maybe it was not as clear when I signed, but it’s something that I don’t want to discuss too much,” Garde said.

“I understand that you cannot carry on doing the same things when you have not been as successful as you have wanted.

“I cannot say the club hasn’t done everything they could. It wouldn’t be fair.

“I’m not happy about this situation. I am not stupid and saying we need nobody.

“Some people have to be brave enough to say what have we done wrong in the past and what we should be doing now to stop that and to be better, maybe not in the next months but the next season or in two or three years.”

Earlier on Monday, Garde had admitted any late deals would not have been his first choice having failed to land the likes of Loic Remy and Mathieu Debuchy, who joined Bordeaux late on deadline day.

He also personally spoke to Doumbia to try to convince him to join Villa, who are bottom of the Premier League and visit West Ham on Tuesday.