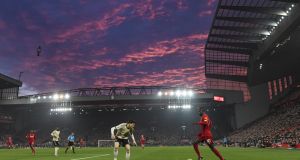 Premier League clubs anticipate having to start individual negotiations over wage reductions with their players after attempts to reach a collective pay agreement in response to the coronavirus crisis were frustrated during talks on Saturday.

While players have been told clubs may lose £1.137 billion (€1.3bn) because of the disruption caused by the pandemic, the Professional Footballers’ Association (PFA) has responded to the Premier League’s proposals of a 30 per cent pay cut by saying that would be detrimental to the NHS.

The proposal will be discussed among squads with a view to reaching a collective agreement by the end of the week, but the PFA has remained defiant in the face of mounting pressure, arguing cuts would lead to a £200 million tax deficit.

There was hope before Saturday’s conference call, which involved managers, captains and representatives of all 20 Premier League clubs, that an agreement would be reached over wage reductions, deferrals or a combination of both. Many top-flight clubs are worried about their income drying up while the season is suspended, and some have already put non-football staff on furlough.

While Manchester City said on Sunday they will not place any staff on furlough, Liverpool invited criticism after announcing they had joined Newcastle, Tottenham, Norwich and Bournemouth in claiming 80 per cent of non-playing staff wages from the government scheme.

However, one source had urged caution before Saturday’s meeting, suggesting that talking the PFA round would be difficult. There is now a growing feeling clubs will eventually be forced to conduct direct negotiations with their own players, which could drag the problem out even further.

There is frustration on both sides. Players are upset at being portrayed as greedy – last week’s comments by the health secretary, Matt Hancock, that footballers “should play their part” did not go down well in dressingrooms – and have stressed they are willing to do their bit.

Hancock was invited to be a guest on Sky’s Monday Night Football programme by Gary Neville after the MP suggested on Sunday that players should donate a portion of their wages to struggling hospices.

Neville wrote on Twitter: “Hey @MattHancock seeing as though you’re focusing on football so much can you come on @SkySportsMNF this week? Special edition . Questions from the football community / fans will be presented by me , @DavidJonesSky and @Carra23.”

The Liverpool captain, Jordan Henderson, is behind plans to establish a coronavirus fund that will allow players to donate directly to frontline NHS staff.

Players want to be sure clubs are not opportunistically looking to save money by reducing their pay. They have sought assurances the money will protect lower-paid colleagues, and would also like to see owners and directors make the same commitment. There is confusion over where the money is going. The feeling is there would be no benefit to society if the wages are simply going back to the clubs rather than to charities and frontline services.

There are many examples of players doing their bit, such as Manchester United’s Marcus Rashford raising £20 million to provide meals for vulnerable children, and the rush to accuse footballers of being out of touch has led to a backlash.

Wayne Rooney, who plays for Championship side Derby, used his Sunday Times column to accuse the government and the Premier League of putting footballers in a “no-win situation”.

Neville, the former United and England defender, was equally critical, saying the league took too long to postpone matches and taking aim at clubs who have already used the furlough scheme.

“Not every footballer is in the same position,” Rooney said. “Yet suddenly the whole profession has been put on the spot with a demand for 30 per cent pay cuts across the board. Why are footballers suddenly the scapegoats?”

Clubs are also in an unenviable position. They have told players the Premier League faces a financial penalty of more than £750 million if the season does not resume and broadcasters demand refunds on games that are not played.

They will also suffer losses in gate receipts if games are played behind closed doors and are unable to start selling next year’s season tickets.

The clubs are frustrated their concerns are not being taken seriously by the PFA, with one executive privately questioning whether Gordon Taylor, the head of the union, plans to take a pay cut.

The situation is complicated by doubts over when the season will resume. While a solution will need to be found for players whose contracts run out in June, it is also understood some players could have reservations over returning to action because of health and fitness concerns. – Guardian

1 Rodgers shunned by some family members for leaving Celtic
2 Colin Kaepernick’s exile is too fresh for NFL to speak out on US protests
3 Connell losing touch with club championship is real tragedy of Normal People
4 Ken Early: Why international football is fading into obscurity
5 GUI release protocols for return to club competitions
Real news has value SUBSCRIBE