Oxford raise the Roofe to send Swansea crashing out 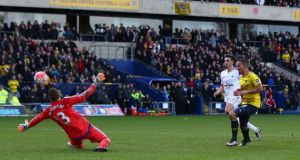 Oxford United see Swansea City as mentors when it comes to club development but here the League Two team taught their Premier League visitors a lesson or two as they deservedly emerged triumphant from a rollicking FA Cup tie.

Michael Appleton’s team ultimately outfought and outplayed their illustrious guests, the upset all the more admirable because they had to come from behind to pull it off, as Jefferson Montero put the visitors in front with an exquisite early goal.

That strike proved that despite Alan Curtis omitting many regular starters ahead of Wednesday’s Premier League showdown with Sunderland, the visitors still boasted rich pedigree. So it was remarkable and immensely admirable to see Liam Sercombe equalise from the penalty spot before Kemar Roofe secured victory with two superb goals.

Bafétimbi Gomis subsequent goal was not enough to save Swansea, who will now concentrate on Premier League survival. Their calendar may now be a little clearer but losing to a club 54 places below them in the league pyramid can only damage Swansea’s morale.

The last time these clubs met, in 2005, both were in League Two but heading in opposite directions, Swansea beginning their marvellous ascent to the top flight while Oxford were about to drop out of league football altogether, not returning until 2010.

Oxford have changed ownership since then and now aspire to emulate Swansea’s rise, so this was a fitting match for them to gauge their progress. They will take enormous heart from this performance and result.

Despite all their personnel changes, Swansea made the better start. Montero squandered a chance to seize the lead in the seventh minute, blasting over from 16 yards after a pull-back from Marvin Emnes. Jonjo Shelvey, meanwhile, repeatedly tried to burst the net from way out, the ball whizzing off target by varying degrees each time.

Oxford gradually found their bearings and began to give as good as they got, their crisp passing and movement justifying the Swansea comparisons. George Baldock, the right back who has excelled this season while on loan from Milton Keynes Dons, was the first to threaten for the home team, racing down the flank and crossing for Roofe, whose header flew just over the bar. Oxford then went close to opening the scoring, as Kristoffer Nordfeldt was forced to tip over a header by Ryan Taylor after an incisive move by Stephen Appleton’s team.

Swansea’s goal in the 23rd minute came slightly against the run of play but there could be no denying its class. Montero pinged a pass to Emnes on the edge of the area and then received a return pass that eliminated two defenders, leaving the Ecuadorian with only the advancing goalkeeper to beat, which he duly did with a delicious back-heeled finish.

Swansea could have killed the tie five minutes later but Emnes miscontrolled when put through by Matty Grimes. Oxford soon set about making the most of that reprieve. Tidily and dynamically they regained the initiative. Swansea began to look relatively slovenly. Curtis must have been eagerly awaiting a chance to change or at least recharge his team at the interval but they could not hold out until then, succumbing to intense Oxford pressure just before the break. After Nordfeldt pushed away a shot by Jake Wright, Alex MacDonald retrieved it and tried to dash into a shooting position, only to be chopped down by Kyle Bartley. Sercombe drove in the resultant penalty.

Oxford started the second half like a side sensing that glory was within their grasp. They were not going to let it slip. Within four minutes of the resumption they were in front thanks to a wonderful goal by Roofe. The 23-year-old, signed last summer after failing to make the grade at West Bromwich Albion, collected a long pass and cutting in from the left, Sercombe placed a splendid curling shot into far corner of the net from 20 yards.

Ten minutes later Roofe topped even that. As Swansea fought limply to save face, Roofe helped clear a corner and then joined in a rapid counter-attack, concluding it by racing on to a pass from Chris Maguire. Nordfeldt rushed out to confront the forward but could not get a firm enough touch on his shot to stop it bouncing into the net.

Gomis pulled a goal back for the Premier League side with a calm finish in the 65th minute. But Oxford did not wilt and actually looked the more likely to score again. Their historic win was fully merited and points toward a bright future for them. Swansea, meanwhile, need to sharpen up fast.