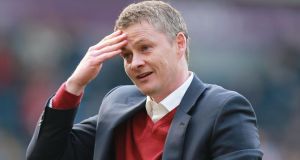 Ole Gunnar Solskjaer has stepped down as manager of Cardiff, the club have confirmed. Photograph: David Davies/PA

Ole Gunnar Solskjaer has stepped down as manager of Cardiff, the club have confirmed.

Solskjaer spent Wednesday in London holding talks with club officials after Tuesday night’s 1-0 home defeat to Middlesbrough had left them in 17th place in the league.

The Norwegian joined Cardiff at the start of January but won only five of his 25 league games in charge as the Bluebirds were relegated from the Premier League and then made a poor start to the new season.

Solskjaer, in a statement on the club website, paid tribute to owner Vincent Tan for allowing him to manage Cardiff.

“I want to thank Vincent for giving me the opportunity to manage Cardiff City FC,” Solskjaer said.

“He has my full respect and I really wish him all the best in his pursuit of making this football club successful.

“However, our difference in philosophy on how to manage the club made me decide to step aside and allow the club to move forward in the direction Vincent wants.

“I leave the club with some very talented players and want to thank them for their efforts and hope to see them challenge for promotion this season.

“I also want to thank (chairman) Mehmet Dalman for his continued and loyal support and feel I have gained a new friend.”

Malaysian businessman Tan – who had fallen out spectacularly with previous manager Malky Mackay before the Scot’s departure in December – said on the club’s official website: “Ole was hired by Cardiff City on our understanding and belief that he would help us fight relegation from the Barclays Premier League.

“Unfortunately that did not happen. After the club was relegated many people advised me to let him go, but I decided to keep Ole on for the Championship season.

“Regrettably our recent results do not justify Ole’s continued role as manager at Cardiff.

“Ole has therefore decided to step down and I have accepted this. During my short association with Ole, I have found him to be an honest and hard-working professional, but unfortunately the football results were not in his favour.

“As long as I am the owner of this club, Ole and his family will always be welcome in the Chairman’s Suite as my guests.

“I wish Ole the very best in his future career in football. We now begin the process of finding his replacement and working towards giving all our stakeholders in Cardiff City the results they deserve.”

Club chairman Dalman added: “Having spoken with Ole on deciding the best course of action for all parties, I’m sorry to say that we have agreed that it is in the best interest of the club for us to go our separate ways.

“Ole has been a wonderful professional to work with since his arrival at the club. Due to a difference in philosophy of approach to the game, we have decided to part company amicably.

“He and his family will always be welcome at Cardiff City. I know I have gained a good friend whom I wish well and remain confident in his future success.”

Wales defender Danny Gabbidon, who returned to the club as a player-coach last month, and Scott Young, another former Cardiff player now coaching in the academy, will take charge of the team for the league trip to Derby on Saturday.

Cardiff have already been linked with Dundee manager Paul Hartley and Welshman Tony Pulis, who is currently out of work after leaving Crystal Palace last month.

But both men appeared to distance themselves from the post on Thursday, with Dundee insisting that 37-year-old former Scotland midfielder Hartley would be staying at Dens Park.

“Regarding the recent speculation and reports out of England. The club would like to confirm that manager Paul Hartley has long term plans to stay at Dundee Football Club,” said a Dundee statement.

“Paul is committed to the club and is looking forward and focused on the upcoming derby matches this week.

“As a club, we are not surprised that speculation linking Paul to other clubs has come up due to the fantastic job he continues to do at Dens Park.

“The club and Paul see the solid foundation which has already been put in place as the beginning of a long- term plan which will see Paul at the helm of the club for years to come.”

Newport-born Pulis, by coincidence, was at a Kuala Lumpur hotel owned by Tan doing a Q&A for Malaysian TV. His interviewer, Belinda Chee, wrote on Twitter than Pulis told her “he has never been approached by Cardiff and that he would prefer to stay in the premier league”.

1 The game they loved so well: How cricket united Hume, McGuinness and McCann
2 Rory McIlroy steadies the ship after shaky start at US PGA
3 Andy Farrell admits Ireland net may need to be spread wide in the autumn
4 Manchester City now facing a rejuvenated Real Madrid
5 Bryson DeChambeau’s driver snaps on seventh tee at US PGA
Real news has value SUBSCRIBE