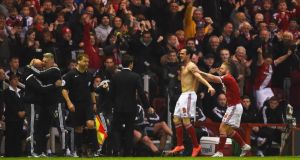 Kike (9) of Middlesbrough celebrates with the team bench after he scored his side’s second goal against Brentford during the English Championship playoff semi-final second leg match at the Riverside Stadium. Photograph: Getty.

Aitor Karanka limbered up for this penultimate hurdle on what he hopes will prove Middlesbrough’s road back to the Premier League with a family trip to North Yorkshire’s Flamingo Land last week.

When Boro’s manager was spotted making full use of the theme park’s rollercoasters, the cod psychologists had a field day.

Yet if the Spaniard regarded it as the perfect preparation for an, on paper, awkward re-match with Brentford, Karanka could not have been more wrong.

In the event his players simply dissected Mark Warburton’s side with the sort of ruthless efficiency that could serve them well in the top tier.

Before promotion is guaranteed there is the small matter of a Wembley final against either Ipswich or Norwich to overcome but the hundreds of Boro fans who invaded the pitch in joyous fashion at the final whistle have no doubts about the outcome. “Going up, ” they chanted as Warburton exited Brentford’s dugout for the final time.

A disagreement over recruitment and tactics with the board has prompted his departure.

After narrowly losing the first leg in west London, the Brentford camp had been a little sniffy about Boro.

A gentle moan to the effect that Karanka’s side are all set pieces and counter-attacks was the gist of it and Warburton’s side immediately set about proving their point with some impressive passing football.

But then Lee Tomlin curled a wonderful shot into the top corner from the edge of the area. Encouragingly for Karanka, the goal’s preamble was every bit as good as its conclusion. It all began with the excellent Grant Leadbitter switching play with a 40-yard ball and Albert Adomah rolled a pass to Tomlin before leaving the scorer to do the rest.

Brentford refused to fold but, scrabbling for half chances, they must have sensed that Wembley and, possibly, the Premier League, were suddenly images on their horizon.

Ten minutes into the second half Boro got their second. Tomlin dispatched a through ball collected by Jelle Vossen. Having held off a defender, he drew David Button off his line before laying off to Kike who lashed the ball into the net.

Adomah emphasised that it was Teesside’s night by scoring his side’s third following an exquisite one-two with Tomlin.

It ended with Adomah stepping inside Button and finding the back of the net with a shot from six yards. Guardian Service