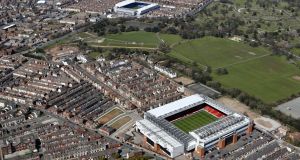 The stadiums of Liverpool and Everton, Anfield (foreground) and Goodison Park respectively, separated by Stanley Park in the city of Liverpool. Photograph: Jonathan Webb/Getty Images.

Scene One: Wednesday night, the Anglican cathedral on the other end of Hope Street. Inside around 80 people sit in a blue-lit alter to worship at the pulpit of Everton FC. It is a curious, double-take sight, evidence of what football can do to folk in a place like Merseyside.

David France is at the hub of it. France is Everton’s uberfan, a local boy who saw his first Everton match in 1957 and who made good in America. Geography could not deny France, though. His non-stop commuting to Goodison Park is said to be the equivalent to four trips to the moon.

After the club chaplain had started proceedings, France held up a board with instructions: “No phones, no profanity, no Niasse.” Oumar Niasse is the midfielder Everton paid £13.5 million (€15.5m) for in January from Lokomotiv Moscow. His impact has been smaller than his fee.

There were laughs at that and plenty more flowed as Joe Royle told of his upbringing in “the leafy hamlet of Norris Green” – a notoriously tough area. Royle joined Everton aged 14 and recalled his dad being offered “£1,000 in £1 notes” to seal the deal. ’Twas ever thus.

Ronnie Goodlass, one of Royle’s colleagues, was from such an Evertonian home that even though he once had Bill Shankly and Bob Paisley in his front room trying to get him to sign for Liverpool, Goodlass’s father said: “Well, son, it’s up to you. But remember, if you sign for them, I’ll never be able to watch you play again.”

On it went. Paul Cookson, “an Everton poet” is a fan of the club and Slade. “Unfortunately,” Cookson said, “I’ve the passing skills of Noddy Holder and the singing voice of Alan Ball. ”

It was the first of a few mentions for Ball, who clearly affected the club and the players around him more than non-Evertonians understand. It was Ball who said: “Once Everton has touched you, nothing will be the same.”

Derek Mountfield took to the podium to say: “It’s part of me, it’s part of you, Everton’s unique.”

After crossing the city from Liverpool in 1982, Kevin Sheedy used the phrase “Everton came into my life”. He is there still, a coach at the club’s academy.

Chief executive Robert Elstone talked about the proposed new dockside stadium and declared all should be “fabulously optimistic” about Everton’s future. Certainly these Blues departed into the night feeling fabulous.

It was quasi-religious, a little indulgent perhaps, but it was also a reminder of the power of football and how people live their lives through the game, that sense of belonging.

It was mentioned, too, that David France’s book titles contain words such as “Obsession” and “Crazy” – his latest. And it was added: “These are synonyms for love.”

Scene Two: Thursday morning, the Anfield cafe on Anfield Road, round the corner from . . .

Howard Gayle is talking about Liverpool – club and city. “I set a precedent,” he says.

Gayle, like Joe Royle, grew up around Norris Green, it’s just Gayle was one of the few black faces around. As such he inhabited the same world as Royle, only different.

“There’d be houses three or four of us would go into as kids,” Gayle says, “the others would be let in, an arm would come across my chest: ‘You wait there, son.’ I had to deal with that, a lifetime so up and down, constantly having to fight, every day.

“If someone shouted something at me I’d cross the road to get them. I’d either give a hiding or get a hiding. And I got battered sometimes.”

Gayle has written about his life and career in an autobiography called 61 Minutes in Munich. The opening pages concern the city of Liverpool’s role in international slavery in the 18th century. Gayle’s father came from Sierra Leone. Gayle rejected an MBE in August.

This is not the average football memoir. Gayle takes us inside the head of a young, black, working-class boy in a white society. There are times when that is unsettling. In the Anfield cafe he mentioned “apprehension” and it sounded like a condition. It’s no wonder when you hear Gayle describe the horrific racism Chelsea’s Paul Canoville received – at Chelsea.

Gayle was a Liverpool supporter who would go on the Kop. There, and elsewhere, he would fight apprehension and fight literally. He proved himself, became a recognisable face in Liverpool’s hooligan crew. When he then signed for Liverpool and made it onto the pitch, he thinks he was accepted because many fans knew who he was. “One of us,” is how he puts it.

But was he? Not when he faced Tommy Smith in training, as he details, and not at other times.

This was only his second senior match, he’d watched the first leg from the Kop. Now he was replacing Kenny Dalglish. Gayle did well, really well, but on 70 minutes he was booked for a non-foul that still annoys him. On the touchline Bob Paisley consulted with Joe Fagan. They were worried about a red card, this referee was obviously erratic. Up went Gayle’s number. The substitute had been substituted.

It’s one of the moments that defined Gayle’s life. He was on the bench in Paris for the final against Real Madrid but in all played just five games for Liverpool. He moved to Birmingham, Sunderland, Stoke and Blackburn afterwards.

But Liverpool never left Gayle and he is animated on the subject of Shankly-Klopp and the “energy of Anfield”.

And belonging? “I do feel Liverpudlian now. I love this city. There are some really good people here with all the things I like – compassion, dedication, humour. There’s a certain togetherness.”