‘Ten years ago, I had more balls, but since I came here it’s been a nightmare’ 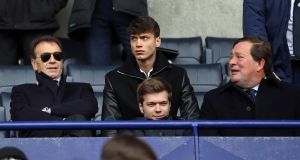 Leeds owner Massimo Cellino has admitted he is considering his future at the club and that his spell in charge is proving to be “a nightmare”.

The 59-year-old Italian lodged his appeal against a second Football League ban in 12 months on Wednesday, having failed its owners’ and directors’ test last week following another tax conviction in Italy.

Steve Evans recently became the club’s sixth head coach since Cellino took control of the club in April 2014, but he has yet to win in three games and Leeds are without a home victory in nearly eight months after Thursday night’s 2-0 defeat to Blackburn.

“I’m losing my balls,” Cellino told The Times, who have reported rumours of renewed interest in the club from Red Bull. “Ten years ago, I had more balls, but since I came here it’s been a nightmare.

“Now I have a low quality of life. I feel shame when I walk to the shop to buy cigarettes if we lose a game.

“I convinced my family to come here and they have run away.

“It’s like being at a party where you’re not welcome. It’s killing me. Every night I lie awake, asking myself, ‘Am I good enough?’.”

If Cellino loses his appeal he will be banned from office until June next year. His previous disqualification in relation to a tax conviction in Italy ran from January to May.

On his latest conviction, for failing to pay VAT on an imported Range Rover, Cellino said: “It never went out of the garage.

“I sent it back to America and bought my son a diesel car the day after.

“The holding company cannot keep this club without me running it. To save money I do 20 jobs. If they ban me and someone else comes in who does not fight for the club, it is dead.”

Cellino said he did remember Lucy Ward, partner of former head coach Neil Redfearn and the club’s former welfare officer, who has filed a case against the Italian for sexual discrimination and unfair dismissal. He had previously said he did not know her.

“Listen, you don’t know how many names I see every day,” he said. “But yes, I remembered — the blonde girl who works in the academy.”

The former Cagliari owner, who pleads his innocence in relation to an outstanding charge of embezzlement in Italy, added: “I’m not a coward. Life is not just about enjoyment. But I ask myself if it’s better if I leave. Only failing to make the fans happy can hurt me.

“You think I can sell a club in five minutes? Who gets hurt in the meantime? Last season someone sent me a lot of bulls***ters.”