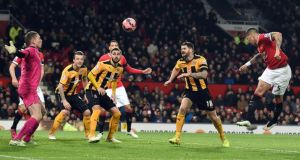 Manchester United enjoyed the kind of relaxed evening that eluded Louis van Gaal’s men in the first game of this fourth-round encounter at the Abbey Stadium.

Then Cambridge United, the minnows from League Two, embarrassed the 11-times FA Cup-winners by holding them to a 0-0 draw that afterwards had the manager moaning about the conditions.

Tonight Van Gaal felt only contentment, a perfect outing ended by James Wilson’s 74th-minute strike that confirmed United’s passage to Preston North End in the next round.

The home team came close to the poorest of possible starts. When Greg Taylor moved past Wayne Rooney with ease the left back threaded a ball infield that failed to find a team-mate.

Instead Daley Blind mopped up, yet when attempting a regulation pass he instead put Tom Elliott clear in on David De Gea’s goal. The visiting No 10 raced forward and made the right shape with his body to curl a finish past the Spaniard but hit the left post rather than the back of United’s net.

As has become customary a little time was required to decipher Van Gaal’s formation. This one turned out to be a 4-2-3-1, a rarity as it had Rooney to the right of the trident behind Robin van Persie, with Juan Mata in the middle and Marouane Fellaini to the left.

In practise this meant Rooney floating in several long balls on the diagonal from his flank, and Angel Di María launching the odd Hail Mary towards Juan Mata when the Spaniard made runs into the visitors’ area.

Twice Rooney received possession along his designated corridor and, from just outside the area, tried a pot-shot at Chris Dunn’s goal. The first of these was blocked, the second featured a cut inside onto the left boot before a tame effort was unloaded straight at Dunn.

Moments later the captain produced a moment of class. This time Rooney was provider, skidding a pass along the turf into the run of Paddy McNair as the right back surged into the area and fired over a dangerous-looking cross.

Before this Di María was hurt in a clash with Cameron McGeehan, but the Argentinian was able to recover to turn creator for United’s opener. It derived from the kind of pacey move that has been lacking this term under Van Gaal. McNair brought the ball out of defence and swept a pass infield through traffic to Mata. After the No 8 switched play to the left he set off on another run into Cambridge’s 18-yard box. His timing proved supreme as Mata was able to meet a Fellaini knock-down, from Di María’s delivery, first time to give United the lead.

McNair was enjoying himself. He moved Rooney aside to hit a volley that might have beaten Dunn if not for a deflection, and from the 19-year-old’s next overlap down the right he won a corner from which United eventually added the second.

The ball ended up at the feet of Van Persie, to the left of goal. With a crowd of team-mates still in the area the Dutchman stood up a precise cross and Marcos Rojo headed in.

This was on 32 minutes and United could coast along largely untroubled to the break, a Ryan Donaldson effort steered wide coming closest to concerning De Gea.

From the XI that defeated Leicester City 3-1 here on Saturday Luke Shaw, Phil Jones, Antonio Valencia, Adnan Januzaj and Radamel Falcao had all made way. Van Gaal put these changes, in part, down to some of the five not having recovered sufficiently from the win over the Foxes, which seemed a strange admission regarding supposedly super-fit elite footballers.

Further oddity was found in the fact that even after the reshuffle there was no place for Ander Herrera, the Spaniard surely by now wondering what he has to do to win the trust of his manager, especially as Michael Carrick is a long-term injury absentee. Herrera has not started a league game for more than two months, since December 2nd. He eventually came on in the 66th minute, as a substitute for Di María.

United’s second-half mission was to be professional and allow Richard Money’s men no way back into the tie. Rooney’s method here was to try to add a third. One of the game’s born attackers thrilled the stadium by controlling the ball with his chest before striking a volley that caused Dunn a problem before, with Van Persie arriving at speed, he flapped the ball away.

Next up was a Di María-Van Persie combination, as the former dinked over a ball that the latter chested into his path before he came close to beating Dunn. Then it was Di María’s turn, and his 25-yarder dipped viciously before the busy visiting keeper repelled the effort, the Argentinian’s last moment of action.

Kick-off had been delayed 20 minutes due to traffic congestion. For United, there is now the trip up the M6 to Deepdale in a competition they must surely feel can be claimed, 11 years after their last triumph.

Preston hit three goals in 10 second-half minutes to dispose of cup kings Sheffield United 3-1 to set up that mouth-watering clash against the Red Devils.

It looked as if the Blades, who were beaten in the Capital One Cup semi-final by Tottenham last week , would continue their love affair with the cup competitions as they led through Jamie Murphy’s first-half opener.

But they were second best throughout and Preston responded in style after the break as Paul Gallagher netted either side of Paul Huntington’s header to arrange the meeting with Louis van Gaal’s side.

Sunderland looked like they would become the latest Premier League victim of a shock-filled FA Cup fourth round until Fulham goalkeeper Marcus Bettinelli’s embarrassing fumble help them turnaround this replay.

Little over a week after Chelsea, Manchester City, Tottenham and Southampton saw their hopes go up in smoke, Gus Poyet’s side looked like they would follow suit after Hugo Rodallega gave the Championship side a first-half lead.

However, an unfortunate own goal from the otherwise impressive Bettinelli was followed up by a fine strike from Ricardo Alvarez and Jordi Gomez’s penalty as Sunderland secured a 3-1 win at Craven Cottage.

A trip to giant-killing Bradford now awaits in the fifth round for Sunderland, who dominated proceedings for the most part.