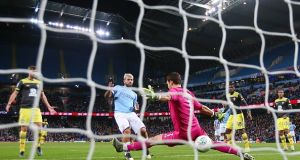 Manchester City took their unbeaten Carabao Cup run to 1,098 days in a near-stroll of a victory over a still-smarting Southampton. This was the visitors’ first game since Leicester trounced them 9-0 and it showed. Southampton did, at least, lose by only two goals and achieve against Pep Guardiola’s men what they failed to do against the Foxes – score – but until City slackened off towards the end they were too tentative.

Guardiola, who made nine changes, gave 18-year-old Tommy Doyle his senior debut and chose both Sergio Agüero and Gabriel Jesus – in his 4-3-3 – for the first time since September’s 2-1 win over Newcastle United here. Ralph Hasenhüttl retained five of the XI that were humiliated by Leicester - Oriol Romeu, James Ward-Prowse, Pierre-Emile Højbjerg, Jan Bednarek and Yan Valery.

Immediately after kick-off the City fans taunted their opposition number with a rendition of: “We want 10”. The first shot they witnessed was Riyad Mahrez aiming low at Alex McCarthy’s goal but the keeper was able to gather the ball with ease. There was far less composure when McCarthy flapped at an Angeliño cross and saw the ball ping around in front him; the visiting keeper was lucky this did not lead to the City opener.

Doyle was operating in the middle of the middle three, asked by his manager to play the holding role. The No 69 spoiled a tidy start by spraying a corner from the left straight out during an opening passage in which Saints were pinned back.

The challenge before the holders was one of trying to break down opponents who held position around the edge of their area. After 20 minutes they succeeded. This time Doyle took a short corner to Bernardo Silva, he swung the ball in and Nicolas Otamendi moved between Romeu and Bednarek to head past McCarthy from close in. It drew a self-mocking chorus of “one-nil to the empty seats” from the home support, as they referenced swathes of unoccupied areas inside the stadium.

For Saints there was some succour to be found in their having been 3-0 down at the same point against Leicester. Yet, when Shane Long found himself with the ball deep in City’s territory just before the 30-minute mark it was the furthest his team ventured throughout the opening half.

Guardiola was not totally content, though. More than once he urged his side to move the ball forward at pace rather than sluggishly and sideways. When Sofiane Boufal shoved Doyle over City had a free-kick 20 yards out. Agüero stepped up but his radar was awry and the ball sailed wide.

Moments later there was no mistake from the Argentinian, City’s second arriving because they upped the tempo. Jesus fed Silva who fed Mahrez and, when Walker overlapped along the right, his instant cross was volleyed home expertly for Agüero’s 11th strike in 12 appearances this season.

At the interval City had been in low gear for most of the first half but had still proved a class or more above their opponents. Saints, perhaps in damage limitation mode after Friday’s embarrassment, had shown close to zero intent, City enjoying 79 per cent of possession .

The expectation was for more of the same and so it proved with the team in blue again controlling the contest with ease. When high gear was engaged the visitors could do nothing about it, as illustrated when Agüero burst through the middle, flipped the ball to Mahrez, and his reverse pass had Silva in. He was thwarted by a desperate, diving McCarthy.

City’s only concern was the possibility of a loss of concentration that might allow a Southampton breakaway. Mahrez’s clumsy touch offered an example but the ball was claimed back instantly and, seconds later, City has scored once more.

Silva’s slick footwork left three defenders trailing before he found Mahrez. The Algerian saw his shot ricochet off Romeu and there was Aguero, again, to poke home from a few yards out.

That was, surely, City through to the next round, and Southampton were left to try and ensure three would not become four, or more. Mahrez came close when a close-range effort was blocked but the sense was a next City strike was on the way.

Hasenhüttl took off Boufal and Long for Ché Adams and Nathan Redmond on 70 minutes and his team claimed a corner. Ward-Prowse took from the right and Jack Stephens forced a save from Claudio Bravo. It was the No 5 who scored Southampton’s consolation, Stephens heading past Bravo from a corner after Angeliño lost him.

But this was a canter of an outing for the holders.