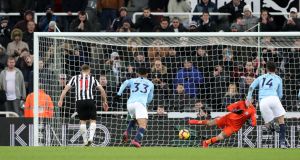 Should Liverpool beat Leicester at Anfield on Wednesday night they will go seven points clear of City. Pep Guardiola’s players may have kicked off with a swagger in their step but they departed Tyneside staring at the floor.

City stepped off their flight from Manchester with the confident air of a side who had scored 28 goals in their previous six games and it took them less than 25 seconds to further enhance such statistics. Raheem Sterling has been setting agendas on and off the pitch of late and he was at it again here, advancing down the right before sending a deep cross looping towards the far post.

With Benítez’s back five looking merely half awake Martin Dubravka came off his line and David Silva challenged - rather bravely - for a header. Almost inevitably, the pair collided, Newcastle’s goalkeeper missed the ball completely and it fell for Sergio Agüero to lash into the empty net from around six yards.

As City celebrated, a familiar refrain rose from the Gallowgate End behind Dubravka’s goal. “We want Mike Ashley out,” they demanded. “We want Ashley out.” Not for the first time, the toxicity directed towards Newcastle’s owner offered confirmation that political tensions are not confined to Westminster. More than 280 miles north of the House of Commons, a febrile civil war has been raging between Benítez and Ashley but, unlike Theresa May, Newcastle’s manager seemed to make a significant breakthrough on Tuesday.

By hinting that no signings by 11pm on Thursday night might prompt him to walk out, Benítez appeared to pull off a rare feat and force the sports retail tycoon into a corner. For once blinking first, Ashley finally extended an olive branch. Where transfer activity had been dormant, St James’ Park suddenly turned into a hive of activity with Paraguayan Miguel Almirón on the verge of becoming a record Tyneside signing and midfielder Andreas Samaris and full-back Antonio Barreca discussing loan moves.

Only time will tell if such transfer activity might mollify Benítez sufficiently to extend his contract beyond May but the immediate future now seems a little more stable.

Newcastle’s defence will doubtless be delighted to have consigned this meeting with City to the past. They could count themselves lucky not to fall further behind when Matt Ritchie conceded a free kick following a foul on Sterling. That dead ball was whipped in brilliantly, and swiftly, by Kevin De Bruyne before Agüero redirected it into the roof of the net. The only problem was that De Bruyne had not waited for the whistle and that “goal” was disallowed.

Far from impressed, City clearly felt this represented painful pedantry on the part of Paul Tierney with their dismay only intensifying when De Bruyne was booked for his quick thinking.

Conscious they had been reprieved, Newcastle regrouped and even gave their guests an odd counterattacking fright, most notably when Christian Atsu’s 20 yard shot took a hefty deflection off John Stones and swerved marginally off target. By now the temperature was plunging and a thin frost seemed to have permeating City’s brains, inhibiting customary invention and incision. At times, Guardiola’s players looked distinctly mortal but all things are relative and they still remained largely in control of the game.

Granted Dubravka had surprisingly little to do but Fabian Schär did make two vital interceptions; namely a splendidly timed tackle which prevented Agüero - impressive and influential throughout - from scoring and then a clearance off the line which diverted Silva’s header to safety after City’s captain had displayed a wonderful change of pace before playing a one-two with Danilo.

Actually exploiting them was something entirely different though. Benítez’s side appeared to lack the necessary ability to improvise, not to mention a killer final ball.

They did however possess plenty of sheer bloody minded determination and it paid dividends when Fernandinho only partially cleared a Ritchie cross and Isaac Hayden headed it back into the box. City had made the mistake of leaving Salomón Rondón unmarked and, having narrowly avoided colliding with Atsu he unleashed a half volley which bounced up from the turf and into the roof of the net, leaving Ederson nonplussed.

The equaliser came very shortly after De Bruyne had been diplomatically withdrawn in the wake of a challenge on Ritchie that was arguably worthy of a second yellow card - Benítez certainly thought so.- Guardian