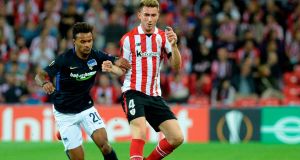 Aymeric Laporte is expected to arrive at Manchester City after Athletic Bilbao confirmed their €65 million buyout clause for the 23-year-old France Under-21 international had been met.

The Spanish club did not specify which club had bought the defender but City have been chasing the player since 2016, stepping up their efforts in this transfer window after giving up on Virgil van Dijk and Jonny Evans, and are understood to have representatives in Bilbao attempting to push through a deal before Wednesday’s deadline.

The capture of a player who has made more than 200 appearances for Athletic sets a spending record for City, narrowly beating the €62.5 million paid to Wolfsburg for Kevin De Bruyne three years ago.

Pep Guardiola caused a little mirth at the weekend when he claimed City were either unable or unwilling to spend €90 million on a single player, but though €65 million for a squad defender is hardly a modest outlay it is some way behind the fees Manchester United paid for Paul Pogba and Romelu Lukaku. City are believed to have been willing to pay Southampton €68 million for Van Dijk, but pulled out when they discovered the asking price had been raised to €85 million.

Whereas Van Dijk is supposed to be the new cornerstone of Liverpool’s defence – not that those plans are panning out particularly well at the moment – Laporte will not necessarily go straight into the team ahead of John Stones and Nicolas Otamendi.

He has been signed as defensive cover principally because Vincent Kompany’s fitness is so unreliable. The club still has Eliaquim Mangala, nearing the end of the five-year contract he signed when joining from Porto in 2014, but though Guardiola has given the club’s existing French central defender a few games this season he appears to have formed the view that the £48 million spent on the player was an expensive mistake.

Laporte posted a Twitter message to Athletic followers thanking them for their support and expressing his gratitude to the club for giving him his chance. “I arrived as a teenager and at Athletic I grew up as a person and as a football player,” he said. “I now face a new challenge in my professional career but I don’t want this to be a goodbye but a see you soon. I know I am leaving a unique club, one that I will never forget.”

City’s spending on defenders since the end of last season has reached €216 million, which gives a fair indication of where Guardiola thought the team needed improving. He was mocked by Jose Mourinho for paying striker-type prices for full backs, though there is no arguing with the club’s present league position. Ederson has been an instant success in goal, Kyle Walker has settled in well at right back, and though Benjamin Mendy has been sidelined by injury, Danilo, signed as cover like Laporte, is proving an adequately flexible replacement.

City have said that Leroy Sane suffered ankle ligament damage at Cardiff on Sunday but have not put a time on the length of the forward’s absence. Guardiola said after the match that Sane would be out for a “minimum two or three weeks, one month”. – Guardian service