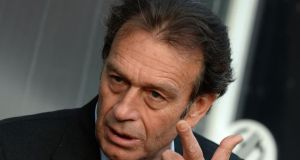 Former Leeds United great John Giles says owner Massimo Cellino should “get out of the club” after he sacked head coach Darko Milanic on Saturday.

Milanic was sacked after 32 days at the helm of the English Championship club having failed to win any of his six games in charge.

Brian McDermott was dismissed in June and his replacement, the relatively unknown David Hockaday, was fired in August having lasted six games in charge.

“I think the best thing he could do is get out of the club and make way for a new owner who could work in the best interests of the fans,” the former Republic of Ireland international Giles told BBC Radio 5 live.

“It’s crazy stuff. I don’t know what he expects of the managers. There are no resources to get players in. He wants miracles, I think.

“They have great support and tradition, it’s a great set-up, fans pay good money, and then this fella comes in with a few bob and he’s making a total mess of it.

“There’s nobody going to stop him. He’s in charge of the place. It’s unfortunate for the fans he’s taken over. If he has a history of it, he’ll continue to do it. It’s madness, and it’s the fans who are suffering.

“It’s outrageous that someone like him could come into a club – any club – and behave the way he has.”

Neil Redfearn, who won three of four games as caretaker manager earlier this season, is widely reported to become the next permanent manager from Monday.

Leeds reached the Champions League semi-final in 2001 under David O’Leary but have since fallen on hard times.