Klopp’s way is to turn doubters into believers at Liverpool 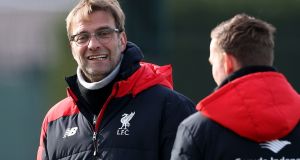 Liverpool manager Jurgen Klopp during a training session ahead of the Capital One Cup final. “I’m not sure I’m the difference, but I know the way, that’s true.”Photograph: Tim Goode/PA Wire

It took 147 weeks for Jurgen Klopp to build Borussia Dortmund into Bundesliga champions and claim the first trophy of his managerial career in Germany. His latest work will not be completed by the Capital One Cup, but the process of turning doubt into belief at Liverpool would be galvanised should Klopp deliver after 143 days in England.

“I am not really sure,” said the 48-year-old on the longer implications of beating Manchester City tomorrow.

“But I am long enough in the business to know I am greedy for success.”

The proven appetite that persuaded Liverpool’s owners, Fenway Sports Group (FSG), to make the most ambitious and important appointment of their tenure in October does have limits.

Klopp rejected the offer of personalised replica trophies to mark the two league titles, one German Cup and two Supercups he won at Dortmund, and not because they cost €3,000 apiece. The moment was enough.

Of more importance was enabling a fallen Champions League winner to compete again, and creating a unified atmosphere between players and supporters en route.

It explains why Klopp called for compromise at Liverpool over the ticket price row that sparked allegations of a different kind of greed at FSG from angry supporters.

And why he opened his Anfield reign by looking into the club’s TV cameras to tell those same supporters: “We have to change from doubter to believer. Now.”

It has been an arduous, educational start at times as seven wins from 18 Premier League games and miserable defeats at Newcastle United, West Ham United and Watford testify.

Faith in Klopp has not been dented. No one expected an immediate transformation (except the journalist who asked whether Liverpool could win the league following October’s 3-1 win at Chelsea) but the Capital One Cup final offers opportunity to strengthen belief in the way ahead.

Silverware would also not harm the allure of Klopp when, as appears likely, Liverpool enter the transfer market this summer without Champions League football to offer.

“It is always the same problem at clubs with a big history like Liverpool if they are not successful in the present. Then you need the right decisions, then the right patience, then you can get back on track. With all the circumstances, with all the big clubs around with a lot of money, we should not go the same way. We have to go our way, how Liverpool always did. This win would help. It would help to win the Capital One Cup, but it is not the only possibility for everyone to believe in this way.”

His first trophy was secured with Dortmund on April 30th, 2011, with a 2-0 win over Nurnberg, but it was promotion to the top flight with Mainz seven years earlier, following near-misses in 2002 and 2003, that he considers the breakthrough.

“I was surprised,” he recalls of the first Bundesliga title. “I thought it would be completely different. I never changed, I am sorry to say, but the whole world around me changed.

“They said ‘the German champion’ – I didn’t think they meant me – or ‘the double winner’ or ‘the Champions League finalist’. That is not how I work. I want to win the next game, really, with all I have, and then we will see how it feels.

“To not get what you want twice, and to then have to go a third time, that was hard. I have had to be patient enough to wait for the right title, but then what is the right title?

“We only have one to win now, and that is what we want to do. I want to win this title, but I won’t take it for myself. In Germany if you win a title you can make a replica of it. I never did it. I have it in my head instead.”

Steven Gerrard believes Klopp’s pedigree and tactical approach – to the fore in Liverpool’s 4-1 win at City in November – will make the difference tomorrow.

“I gave him £100 to say that,” responded the Stuttgart-born coach. “I’m not sure I’m the difference, but I know the way, that’s true.”

Not that Liverpool require guidance on winning this competition. Klopp’s motivational work for the cup final includes showing his players a montage of Liverpool’s past League Cup victories – eight in total, a record – before the club’s 12th final appearance, another record.

He has not lost in three meetings with City or in three encounters against Pellegrini. “Beat them when you meet them,” he says.

Klopp described playing at Wembley as “the best thing you can do in football” before the semi-final shootout win over Stoke City, but both he and Liverpool have sour memories of their last visits.

The manager’s only previous experience ended in a wry smile and bear-hug for Jupp Heynckes after Bayern Munich won an enthralling all-German Champions League final in 2013 with an 89th-minute goal against Dortmund.

“We will not have an Italian referee this time,” he said, still smarting at Nicola Rizzoli’s refusal to show the Bayern defender Dante a second yellow card.

“I have had to accept a few times in my life that it is not decisive even if you want to win with all you have but, for sure, we will go to the final and try and achieve this,” Klopp said.

“It is more important for the club, the crowd, the players and, of course, I would enjoy it with all I have, but my job in a final is not to say to the players: ‘You have to give your all.’ It is a final - everybody will give their all.” Guardian Service