Watford get no return for long periods of Old Trafford domination 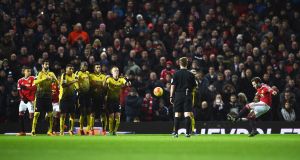 Juan Mata scores from a free-kick for Manchester United in their Premier League game against Watford at Old Trafford. Photograph: Laurence Griffiths/Getty Images

Manchester United are starting to catch fire as a late season surge is required to claim a Champions League place. When Juan Mata belted home a sweet 20-yard free-kick that proved the winner there were seven minutes remaining and the way he wheeled away in celebration spoke of how the Spaniard had transformed the match.

Before then United were heading for a draw and the gaining of only one point on Manchester City, who lost at Liverpool, and with West Ham United beating Tottenham, Louis van Gaal’s side would have dropped a place to sixth. Instead, with 10 matches left, United have the same 47 points as City and are fifth only on goal difference.

Marcus Rashford was named for a third consecutive start and on the 25th anniversary of Ryan Giggs’s first game for United there was a full debut for Tim Fosu-Mensah. The 18-year-old lined up next to Daley Blind, because, according to Van Gaal, Michael Carrick was “rested”. The two Dutchmen were asked to marshal the muscular strike duo of Troy Deeney and Odion Ighalo.

Fosu-Mensah made United’s first mistake, giving away possession to allow a Watford move that ended with an Ighalo shot that hit Blind and went behind for a corner.

This did not deter Fosu-Mensah. His next action was to crunch into a 50-50 tackle with Deeney from which the Watford captain emerged a little gingerly. Further impressive play came when the centre back dispossessed Ighalo in the penalty area when timing was the essence. The same quality was missing when he up-ended Etienne Capoue and was booked.

Anthony Martial returned to the side for a match Van Gaal hoped to win to record United’s first consecutive league victories since defeating Watford in November. Martial, whose injury handed Rashford his chance, had United’s opening chance when Ander Herrera picked him out but his header was stooping and simple for the alert goalkeeper Heurelho Gomes to gather.

Even though Morgan Schneiderlin brought gasps from the crowd with a long-range volley, Watford carved United apart. Capoue was enjoying himself along the left and from there he fashioned a cross that was flicked on by Deeney – beating Fosu-Mensah – to Ighalo whose turn and shot was wide but it served as a warning.

As the 30-minute mark passed Rashford had barely touched the ball but he was about to come to life. His sharp swivel and toe-poke made a mug of Sebastian Prodl and drew a foul from the Watford defender.

Memphis Depay took the free-kick and his delivery went straight to Gomes. The forward had misfired throughout the first half, which was largely the story of United’s stuttering play. Watford could have been two ahead, Ighalo twice being denied by the reflexes of David de Gea.

The hope was that the second half would be an improvement. Capoue had been the brightest player and he gave United a scare with a fierce 30-yard shot that sailed only a little high.

There was further concern when Watford went close from a corner they won after a terrible Blind miskick. Ben Watson swung in the ball and Prodl’s header was beaten out at the near post by the excellent De Gea.

The one charge that cannot be levelled against Depay is of his spirit being dimmed when out of sorts. The forward took the ball and tore through the Watford defence before being halted inside the area.

This yielded nothing but with City losing 3-0 at Anfield and West Ham winning United required all three points.

Mata was captain for the match and his rescue act began with two shots at Gomes before engineering a move in which Rashford crossed when he may have tried to finish. It did not matter though as the best was about to come from the Spaniard.

Warm weather training in Spain is possibly not the ideal preparation for sub-Arctic conditions in Stoke, but Newcastle United were coping with the cold and a 17-day lay-off before Xherdan Shaqiri struck 10 minutes from time to lift the home side above Chelsea and Southampton in the table and increase the pressure on Steve McClaren.

This was a chance for Newcastle to escape the bottom three and they could not take it. While a draw would not have been an injustice on a night when driving, icy winds made football difficult for both sides, it was not one of Stoke’s more impressive performances and the travelling supporters must have left wondering when conditions will favour a Newcastle recovery, if a fortnight off and a hectoring from their manager could not do the trick. Bournemouth at home on Saturday presents an obvious opportunity, and nothing less than a win will suffice.

This was such a scrappy, squally game it was obvious the first goal or moment of skill might settle it, and so it proved, even though the combination took 80 minutes to arrive. Shaqiri turned up in the middle for a change, and taking a pass from the substitute Mame Biram Diouf, beat Rob Elliot from outside the area with a left-foot shot the goalkeeper could only stand and watch.