Chelsea manager does not expect to emulate Arsenal’s ‘Invincibles’ side 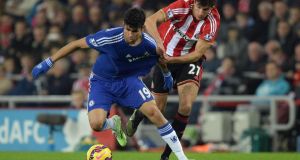 Chelsea’s Diego Costa, in action against Sunderland, will miss the clash with Tottenham after getting a yellow card in that match. Photograph: epa

The leaders are currently enjoying their best ever start to a campaign and host Tottenham Hotspur, who have not won at Stamford Bridge since 1990, on Wednesday hoping to extend their run to 21 games undefeated this term and 23 in all.

Mourinho has consistently stated he does not expect to emulate the achievement of Arsenal’s “Invincibles” of a decade ago in surviving the entire season unscathed and reiterated that conviction on the eve of the London derby with Spurs.

“The first thing is that I don’t think it’s possible [to go unbeaten all season],” said Mourinho. “The other thing is we are not playing for that. Because, if you play for that and that is one of your objectives, maybe you draw too many matches because you don’t take risks to try and win matches.

“But we aren’t focusing on that. We don’t. If against Tottenham we are 0-0 with 20 minutes to go, we are not going to play for the 0-0 to be undefeated after 21 matches. No way. We are going to play matches to win. And, as a result, sometimes we will lose.”

Mourinho’s side have yet to shed a point at home this season, but their preparations for this game have been hampered.

Their journey home from Sunderland on Saturday was disrupted by fog, prompting a rethink in terms of their recovery before the Spurs game.

Chelsea will be without their suspended leading scorer, Diego Costa, who picked up his fifth yellow card of the season on Wearside, and will choose between Didier Drogba – who terrorised Tottenham in his last appearance against them, a 5-1 FA Cup semi-final success in 2012 – and Loic Remy up front.

Tottenham will have defender Kyle Naughton available following his two-match Premier League suspension. Emmanuel Adebayor, who has been suffering from a virus and back problem, is among several players who will be assessed, with Etienne Capoue and Danny Rose also concerns with knocks.

Full-back Kyle Walker continued his recovery from abdominal surgery by playing for the Under-21s against Manchester City on Monday night. Guardian Service