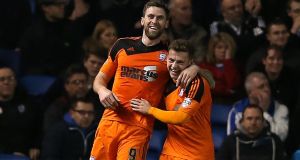 Substitute Tom Ince rescued a point for Derby to keep their automatic promotion hopes on track in a thrilling 2-2 televised draw at Leeds that will have delighted broadcasters Sky.

Ince lashed home a 78th-minute equaliser after Chris Wood had headed Leeds into a 2-1 lead, while home skipper Sol Bamba had earlier cancelled out Irish midfielder Jeff Hendrick’s 13th-minute opener for the visitors just before half-time.

Leeds owner Massimo Cellino reluctantly agreed to allow the game to be televised live at the 11th hour after relenting on his threat to ban Sky Sports cameras from Elland Road.

The Italian is in a bitter dispute with the Football League over the number of Leeds games that have been screened live this season – this was the 10th, with two more scheduled for early next year – and the disruption that causes to players, staff and fans in order to accommodate Sky.

Leeds did not appear to be distracted by the ongoing row in the opening exchanges, but then did their best to make Derby feel all too welcome with some sloppy defending, which led to the opening goal in the 13th minute.

Derby’s former Leeds defender Stephen Warnock threaded the ball into the penalty area and both Liam Bridcutt and Bamba declined to attack it, allowing Hendrick ample time to lift his shot over goalkeeper Marco Silvestri.

Leeds took the lead in the 71st minute. After they worked the ball down the right channel, Byram raced beyond Warnock and sent over an inch-perfect cross for Wood to head home his eighth goal of the season.

Derby showed why they are among the promotion favourites to hit back seven minutes later when Johnny Russell set up Ince, who drilled home a fine finish into the bottom corner having only replaced Weimann two minutes earlier.

The outcome before a crowd of 27,689, Brighton’s biggest of the season, leaves the fourth-placed Seagulls without a win in their last five games.

Teenager Oliver Burke scored his first senior goal as Nottingham Forest stretched their unbeaten run to seven games with a 1-1 draw at Cardiff.

New Fulham manager Slavisa Jokanovic watched from the stands as the Cottagers enjoyed a 4-1 victory over Rotherham at Craven Cottage – their first league victory in 10 attempts.