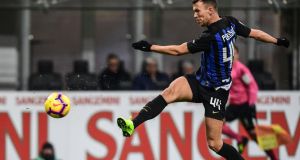 Ivan Perisic has handed in a transfer request in an attempt to force through a move to Arsenal after Inter Milan rejected the Premier League side’s attempt to sign him on loan.

The Croatia international has emerged as Unai Emery’s key target for the January transfer window, with Arsenal having already seen an offer turned down to take the 29-year-old on loan until the end of the season with a €40 million option to buy.

Inter are understood to be open to allowing Perisic to leave, although they would prefer a permanent deal or obligation to buy for the player they signed from Wolfsburg in 2015.

“Perisic has asked to leave but there is no offer for him,” said Inter director Giuseppe Marotta.

“We will see in the coming days. We will listen to the request of Perisic, he has put in a transfer request; we must try to satisfy him but also respect the value of him.”

It remains to be seen whether Arsenal return with a new bid after Emery admitted earlier this month that they will only be able to sign players on loan this month.

Arsenal defender Sokratis Papastathopoulos has been ruled out for a month with an ankle injury, leaving Unai Emery with a defensive shortage ahead of a busy February.

Sokratis was substituted during Friday’s FA Cup loss to Manchester United after jarring his leg, but Emery had initially appeared optimistic that the problem would not be long-term.

However, an update on the club website said that the Greek centre-back will return to training “by the end of February”.

There was better news for Emery as the club also revealed that Laurent Koscielny did not suffer a fractured jaw after a collision with Romelu Lukaku. The Frenchman suffered “bruising and soft tissue swelling” to his face, with the statement adding that his fitness is being “reviewed on a daily basis”.

Emery is already without Rob Holding and Hector Bellerín with long-term knee injuries, so will hope Koscielny is available again soon with a crowded fixture list coming up. Arsenal host Cardiff on Tuesday evening, before trips to Manchester City (February 3rd) and Huddersfield (Febuary 9th).

The club will also return to Europa League action with a two-legged tie against Bate Borisov, and host Southampton (February 24th) and Bournemouth (Feb 27th) before the North London derby on March 2nd. – Guardian