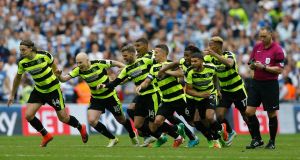 Huddersfield Town are back in England’s top-flight after a 45 year absence and a suspense-racked playoff final, with Christopher Schindler sealing a sensational return to the elite by scoring the decisive penalty in the shoot-out.

That last twist on a gripping afternoon at Wembley sealed an extraordinary achievement by the Yorkshire club, who were widely expected to be closer to relegation than promotion this season.

Ted Heath was the British prime minster and T-Rex were top of the charts the last time Huddersfield were in the top flight but here David Wagner’s unlikely band of heroes ushered in a glorious new age for one of the lowest-resourced clubs in the Championship.

Schindler became the club’s record signing when he joined from 1860 Munich for a mere £1.8m last summer and his goal here earned Huddersfield a minimum of £170m (€195m).

More than that, it brought spectacular reward for the vision of the club’s chairman, Dean Hoyle, and manager David Wagner.

Wembley was awash with blue and white, the only distinction between the 76,682 fans being that one set wore hoops, the other stripes. Together they made a tremendous racket. Neither lot had foreseen this scenario at the start of their campaign, what with Reading having finished last term 17th in the Championship while Huddersfield wound up 19th.

Each club has been transformed since then – but each knew that only one could crown that improvement with promotion. They fought here for that honour as if it was, as Wagner suggested, a once-in-a-lifetime opportunity.

The occasion was exceptional but the approaches familiar. Both managers had guided their team this far by hothousing distinctive styles and had no intention of deviating from their methods here.

Each deployed the same lineup that had started the second legs of their respective semi-finals and seemingly issued instructions to carry on doing what they had done to date.

Wagner’s team began applying that order immediately and swarmed all over their opponents in the opening minutes. They were sharper than Reading all over the pitch, superb in everything but their finishing. That break in Portugal after the semi-finals seemed to have done them the world of good.

Michael Hefele should have scored in the fourth minute when Aaron Mooy found him with a curling freekick from the left. But the centre-back, inexplicably free six yards from goal, nodded wide.

Hefele held his head in disbelief but he and the rest of the people in the stadium were rubbing their eyes in wonder six minutes later when Izzy Brown missed an even clearer opportunity.

The chance was made by incisive running down the right by Tommy Smith and Elias Kachunga, and when the latter fired the ball across the face of goal, Brown seemed certain to tap it into the net at the back post.

But to the immense relief of Reading the midfielder failed to make a proper connection, prodding the ball wide with his shin from three yards. It was the type of miss that can haunt. Its consequences threatened to grow all the grimmer as chances almost vanished thereafter.

Reading drew confidence from their reprieve and gradually got a foothold in the game, with the forceful Danny Williams especially influential in midfield. The clash developed into a confrontation of styles; Huddersfield attacked like a whirlwind when in possession, whereas Reading’s relatively slow and methodical passing made them more akin to a steady breeze intent on eroding the opposition rather than blowing them away.

The closest Stam’s team came to scoring in the first half was immediately after Brown’s miss, when Lewis Grabban spun past Schindler and spanked a shot wide from 20 yards.

As the first half wore on it turned feisty, tense and exactly as tight as predicted in view of the teams’ two confrontations in the regular season, when each eked out 1-0 wins at home.

The stakes made the drama gripping even if the action became scruffy. Neither goalkeeper made a save until just after half-time, when John Swift burst from midfield and unleashed a powerful drive from 20 yards that Danny Ward batted away.

Reading slowly pushed their opponents deeper but lacked the ingenuity to unpick Huddersfield’s defence. The tension fairly crackled. On the hour the Yorkshire team served a reminder of their threat, Smith leading a charge forward before firing over from 16 yards. Then, at the other end, Grabban might have netted if not for a last-ditch tackle by Hefele.

Williams’ central midfield duel with Mooy was among the more captivating features of the afternoon. The Australian got one over the USA international in the 75th minute when he barged past him down the right and cut the ball back for Collin Quaner but the substitute could not direct his shot on target from 12 yards. Hefele made another decisive intervention in the 81st minute, sliding in to poke the ball off the foot of Yann Kermorgant just as the striker seemed set to turn in a cross by Chris Gunter.

In stoppage time Garath McCleary gave Gunter a chance to do better but the wing-back headed over from eight yards from a difficult angle.

After 90 minutes the teams remained deadlocked, the suspense thrillingly hard to bear. McCleary produce gasps in the dying moments of the first period of extra-time when he fired just wide from the edge of the box.

Five minutes from the end of the second period Kasey Palmer delivered a low cross from the right to Nahki Wells, who swivelled near the penalty spot before dragging a shot wide. And so the contest progressed to the ultimate tie-breaker.

Huddersfield fans rejoiced when it was decided that the shoot-out would take place in front of them. But not when Kermorgant netted from the first one. Chris Löwe and Williams then scored, too, before Ali al-Habsi saved from Hefele.

Liam Kelly and Nakhi Wells scored before there was another twist, as Liam Moore blasted over the bar. Mooy converted to draw the teams level again. Ward then saved Jordan Obita’s low effort. Schindler scored.